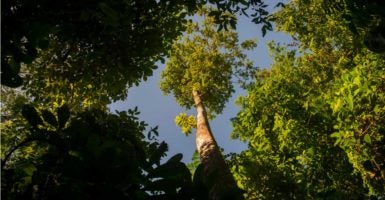 An increase in atmospheric carbon dioxide potentially has some benefits, including a higher amount of lush vegetation. (Photo: Wolfgang Kaehler/Avalon/Newscom)

The way Americans perceive climate change is too often determined by their hearing just one side of the story.

The American people should be made aware of both the negative and positive impacts of carbon dioxide in the atmosphere. Without the whole story, how can we expect an objective evaluation of the issues involving climate change?

While it is indisputable that the amount of carbon dioxide in the atmosphere is gradually increasing, this does not automatically justify all of the alarmists’ claims.

The benefits of a changing climate are often ignored and under-researched. Our climate is too complex and the consequences of misguided policies too harsh to discount the positive effects of carbon enrichment.

A higher concentration of carbon dioxide in our atmosphere would aid photosynthesis, which in turn contributes to increased plant growth. This correlates to a greater volume of food production and better quality food. Studies indicate that crops would utilize water more efficiently, requiring less water. And colder areas along the farm belt will experience longer growing seasons.

While crops typically suffer from high heat and lack of rainfall, carbon enrichment helps produce more resilient food crops, such as maize, soybeans, wheat, and rice. In fact, atmospheric carbon dioxide is so important for plant health that greenhouses often use a carbon dioxide generator to increase production.

Besides food production, another benefit of increased carbon dioxide in the atmosphere is the lush vegetation that results. The world’s vegetated areas are becoming 25-50 percent greener, according to satellite images. Seventy percent of this greening is due to a rise in atmospheric carbon dioxide.

Also, as the Earth warms, we are seeing beneficial changes to the earth’s geography. For instance, Arctic sea ice is decreasing. This development will create new commercial shipping lanes that provide faster, more convenient, and less costly routes between ports in Asia, Europe, and eastern North America. This will increase international trade and strengthen the world economy.

Fossil fuels have helped raise the standard of living for billions of people. Furthermore, research has shown that regions that have enjoyed a major reduction in poverty achieved these gains by expanding the use of fossil fuels for energy sources.

For nations to progress, they need access to affordable energy. Fossil fuels provide the energy necessary to develop affordable food, safe drinking water, and reliable housing for those who have never had it before.

Studies indicate that in the U.S. alone, the natural gas industry is responsible for millions of jobs and has increased the wealth of Americans by an average of $1,337. Economic growth as well as greater food production and increased vegetation are just some of the benefits that can result from our changing climate.

The Obama administration planned to spend hundreds of billions of dollars on policies that would have a negligible impact on the environment. The Clean Power Plan would have reduced global temperatures by only three one-hundredths of 1 degree Celsius. If we stop over-reacting to climate change hysteria, we can allocate those funds to benefit Americans in such areas as educational opportunities, health care, and technological innovation.

The use of fossil fuels and the byproducts of carbon enrichment play a large role in advancing the quality of human life by increasing food production to feed our growing population, stimulating the economy, and alleviating poverty.

Bad deals like the Paris Agreement would cost the U.S. billions of dollars, a loss of hundreds of thousands of jobs, and have no discernible impact on global temperatures. Instead of succumbing to fear tactics and exaggerated predictions, we should instead invest in research and technology that can help us better understand the effects of climate change.