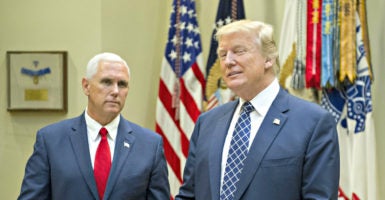 Vice President Mike Pence, pictured with President Donald Trump in the Roosevelt Room of the White House before meeting Tuesday with veterans of the Afghanistan War, is chairman of the Presidential Advisory Commission on Election Integrity. (Photo: Ron Sachs/CNP/AdMedia/Sipa/Newscom)

A presidential commission to examine voter fraud and the soundness of election systems across the country has a big job ahead as it convenes Wednesday for the first time.

Not only is the Presidential Advisory Commission on Election Integrity charged with investigating what to do about voter fraud cases and establishing best practices, it must do so despite meeting with resistance from some state election officials.

The initial meeting, set for 11 a.m. in the Eisenhower Executive Office Building, will be livestreamed on WhiteHouse.gov.

One tool at the commission’s disposal is a database from The Heritage Foundation that compiles 1,071 cases of proven instances of voter fraud across the United States, the bulk of them prosecuted since 2000.

Most of those cases, 938, ended in a criminal conviction. Another 43 ended in civil penalties. A judge directed the defendant into a pretrial diversion program in 74 cases, and 16 ended in judicial or official findings.

The cases of proven fraud took place in 47 states, according to the database.

“A big advantage of the database is that it shows all the different ways that fraud can be committed,” commission member Hans von Spakovsky, a senior legal fellow at The Heritage Foundation, told The Daily Signal. “It demonstrates, for example, you don’t only have to worry about vote-buying. A lot of cases involved that, but you also have to worry about what are the rules governing absentee ballots, since there are a lot of cases in the database of people casting absentee ballots.”

President Donald Trump created the bipartisan commission through an executive order in May. He named Vice President Mike Pence as chairman and Kansas Secretary of State Kris Kobach, also a Republican, as vice chairman.

The 12-member commission has seven Republicans and five Democrats.

The agenda for the first meeting appears broad, not focused on specific issues of ensuring clean elections.

Trump has complained of 3 million to 5 million fraudulent votes in the 2016 presidential election that lifted Democratic presidential nominee Hillary Clinton’s vote tally. Critics of the commission, including California Secretary of State Alex Padilla, a Democrat who oversees elections in that state, have said the panel is only trying to prove Trump actually won the popular vote as well as the Electoral College.

But von Spakovsky says that is not the goal.

“The whole purpose of the commission is to take a look at the entire American election process, from the voter registration system, to the casting of ballots, to counting of ballots, to the security—including cybersecurity—that surrounds all of this,” said von Spakovsky, previously both a Justice Department lawyer and member of the Federal Election Commission. “We’re not only trying to look at what problems exist, but also [determine] have people taken advantage of those problems.”

Despite resistance from some states in providing information to the commission, White House press secretary Sean Spicer said he believes most state election data will be obtainable—and without buying it, as political campaigns and private companies do.

“Most of this information is available,” Spicer told The Daily Signal. “All that those companies are doing is buying it from the states. So I don’t think there would be any reason to go to a private vendor. I think we should be able to do this utilizing official resources that exist within a state. “

Again, I think there’s been some miscommunication on what they’re seeking. The commission has asked that each state provide that information that is public, that they share. And because that varies from state to state, what they’re willing to give out, the commission was illustrative in its letter [to state election officials] in trying to describe what it was looking for. But I think we’re going to move forward very well.

Liberal groups such as the Brennan Center for Justice and the League of Women Voters, which have opposed voter ID laws and other voter integrity measures, sued Indiana Secretary of State Connie Lawson, a Republican commission member, because she’s providing the information.

Voter ID laws require voters to first show photo identification, such as a driver’s license or a special voter ID card, to demonstrate they are who they say they are and live where they say they do.

“The commission cannot bypass state rules designed to protect sensitive voter information,” said Myrna Pérez, deputy director of the Brennan Center’s Democracy Program, in a public statement. “Lawson might be a member of this panel, but her first duty is to the Hoosiers who trusted her with personal information so that they could participate in fair and free elections in the state. She must proceed carefully and with legally mandated procedures before sharing voter data.”

Pence is the former governor of Indiana, which he also represented in the U.S. House.

The panel likely will push best practices among states, such as voter ID and updating voter registration rolls, said Jason Snead, a legal policy analyst with The Heritage Foundation, who studies voter fraud and helps maintain the think tank’s database on voter fraud.

Snead noted a Pew Research Center study that found 1.8 million dead people were listed as voters, 12 million records with incorrect data, and 2.75 million persons registered in more than one state.