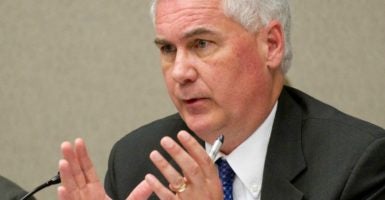 The House’s largest caucus of conservatives is throwing its weight behind a budget proposal that it says would cut more government spending and advance conservative principles further than the official Republican plan.

The spending plan would allow the House “not only to put our spending under control but to assure that the money that we are spending is well spent,” McClintock said.

It includes more than 250 specific spending cuts and reforms, McClintock, chairman of the 178-member caucus’ Budget and Spending Task Force, said in a press briefing Friday.

The Budget Committee’s budget resolution would cut or slow the growth of spending on food stamps and other welfare programs while increasing defense spending, the Associated Press reported. But conservatives, especially those in the House Freedom Caucus, want deeper cuts, while some centrists worry about reducing spending by too much.

Many of President Donald Trump’s promises to “drain the swamp,” including significant tax reform, hang on the budget plan Republicans eventually agree on.

“The status quo is unsustainable. A mounting national debt and lackluster economic growth will limit opportunity for people all across the country,” Black said in a written statement. “But we don’t have to accept this reality. We can move forward with an optimistic vision for the future and this budget is the first step in that process.”

A Budget Committee vote was expected Wednesday, but a vote by the full House will come only after House Speaker Paul Ryan seeks to bring together disagreeing factions.

Black, taking over as House budget chairman from Georgia Republican Tom Price, now Trump’s secretary of health and human services, proposes to add nearly $30 billion to the president’s $668 billion request for defense, AP reported. But she would restore all but $5 billion in offsetting cuts Trump proposed in domestic agencies and foreign aid.

Rep. Mark Walker, R-N.C., chairman of the Republican Study Committee, said the caucus’ more demanding budget plan is all about preparing for the future.

“I think you have to ask yourself a couple questions to get us to this point,” Walker said at the Friday briefing for reporters, adding:

Are we on a sustainable path? The truth is that, overwhelmingly, both Republicans and Democrats would answer the same way: ‘No, we’re not.’ … And most of the people that serve in the United States Congress, they know it’s not. Well, then, what’s the solution? It is just repeating the same programs and patterns that we’ve done, or is it our responsibility to begin to bend that bell curve back a little bit?

The RSC’s budget plan allocates $6.9 trillion for national security spending, including $668 billion for defense and $394 billion for nondefense.

The hope is that the caucus’ budget will pave the way for spending plans down the road, McClintock said.

“We don’t expect the RSC budget to pass; we do expect it to point a path back to solvency for future congresses to consider,” he said.

Walker said some states have led the way in reforming food stamp eligibility, and seen “incredible improvement” in restricting abuse of the welfare program.

Such reform, he said, “has got to be part of who we are as Republicans.”

The Daily Signal previously reported that participation in Alabama’s food stamp program dropped by 85 percent in 13 counties after officials said able-bodied adults without dependents must work, look for work, or get approved job training in exchange for food stamps.

“If you want to see someone being pulled out of poverty … create some kind of incentive for folks to further their education, to engage,” Walker said.

“If you are going to accept these government benefits, and you are physically and mentally able to do so, then why wouldn’t we want to encourage people to pursue life along those lines?”