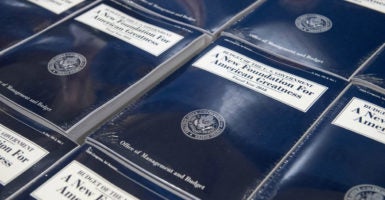 The CBO estimates the president's budget proposal would produce a deficit of $720 billion by the year 2027. (Photo: Kevin Dietsch/UPI/Newscom)

The report paints a stark picture of the proposal compared to the administration’s findings, showing that the president’s budget would never reach balance.

In the report, the CBO uses different criteria and assumptions than the Office of Management and Budget, which has promoted the budget on behalf of the administration.

Despite the disagreement between the two organizations, one thing is clear: It is impossible to balance the budget over the long term without reforming Medicare and Social Security, which are the key drivers of federal spending and debt.

In May, the president released his “America First” budget, titled “A New Foundation for American Greatness.” The Office of Management and Budget reported that the plan would reach a modest balance by fiscal year 2027 and dramatically slow the growth of the federal debt, reducing it from 77 percent of the economy to just under 60 percent.

The administration also reported that the combination of deficit reduction and tax reform policies would lead to robust economic growth and raise the nation’s gross domestic product to over $31 trillion in 2027—$3 trillion higher than the CBO’s latest economic forecast.

The CBO’s analysis paints a different picture overall, saying the president’s budget would actually produce a deficit of $720 billion by the year 2027.

To the administration’s credit, this is still less than half of what the CBO projects deficits would be under current law. Still, the president’s plan suffers from lack of policy details in various areas and relies heavily on favorable economic outcomes.

>>> See The Heritage Foundation’s “Blueprint for Balance,” which would balance the federal budget in just seven years.

The CBO projects that over 10 years, cumulative deficits would be about $3.7 trillion higher than the Office of Management and Budget’s projections. In terms of impact on the federal debt, it estimates the budget would reduce the debt-to-gross domestic product ratio to just under 80 percent—about 20 percent higher than what the Office of Management and Budget projects.

The CBO generally agrees with the Office of Management and Budget when it comes to the effect of spending proposals. The CBO’s analysis shows that the president’s budget would cut total spending by about $4.2 trillion over 10 years, whereas the administration estimated about $3.6 trillion in cuts.

Such cuts would shrink the federal bureaucracy and truly drain the swamp, unleashing a level of economic growth Americans have not seen in years.

The two analyses diverge, however, when it comes to revenue projections.

The Office of Management and Budget assumes the implementation of revenue-neutral tax reform that will lower rates for individuals, investors, and businesses.

The administration assumes that this approach, in combination with its deficit reduction plan and regulatory reform agenda, would generate an additional $2 trillion in revenue due to accelerated economic growth.

The CBO, citing a lack of sufficient details on the tax plan, assumes no additional growth from tax reform and a modest impact from the effects of deficit reduction.

The CBO projects that the president’s budget would actually reduce revenues by about $1 trillion over the next decade by repealing Obamacare and its related tax provisions.

While it may be true that Trump’s budget will unleash faster economic growth and reach balance faster than the CBO projects, it still does not adequately deal with the massive federal debt.

The president’s budget is a good first step, and Congress should carefully consider it. However, because it lacks specificity in addressing the major drivers of debt—Medicare and Social Security—it falls short as an effort to restore the nation’s fiscal health.

The president must continue to build on the reforms outlined in his budget and work with Congress to implement them now, rather than further delaying real spending reforms.

In addition, it is time for the administration to take the lead in the tax reform debate and help form a consensus between all of the competing options that have been presented thus far.

Social Security and health care spending, combined with interest payments on the federal debt, are soon projected to consume all federal revenues. And Social Security is already running massive cash-flow deficits of $66 billion in 2016 alone.

It is impossible to sustain long-term balance without making reforms to these programs. The U.S. did not get onto this unsustainable fiscal path for lack of revenue, but rather for lack of fiscal restraint.

Rather than banking on economic variables outside of their direct control to help fix the problem, the president and Congress should focus on spending reforms and specific tax proposals that will encourage growth and spur the economy.