From Cactus Theater to the Met, US Government Pours Hundreds of Millions Into Well-Heeled Arts 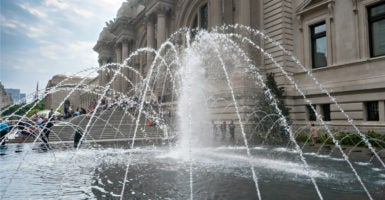 The Metropolitan Museum of Art in New York has reaped $1.2 million from the U.S. government since 2009, according to a report from the group Open the Books detailing taxpayer subsidies of the arts and humanities. (Photo: Richard B. Levine/Newscom)

U.S. taxpayers have paid $90,000 for a theater “performance” in which people commune with a tall cactus for an hour in the middle of an Arizona desert, “to discover what it can teach them.”

On a posher scale, the Metropolitan Museum of Art in New York netted $1.2 million in taxpayer-funded grants from the U.S. government since 2009, nearly half of it last year.

These are just two perhaps unexpected findings in a new report from Open the Books that reveals hundreds of millions of dollars in taxpayer money granted to thousands of nonprofits and other organizations by the National Foundation on the Arts and the Humanities.

The report says the government foundation distributed $441 million to 3,163 entities in fiscal year 2016, which ended Sept. 30.

Of these, 71 are “asset-rich” nonprofits, the report says, meaning their assets exceed $1 billion. Even so, they received $20.5 million in grants.

Open the Books says its mission is to “capture and post online all disclosed spending at every level of government.” The goal: to show Americans where their taxes are going and let them decide if it adds up to government waste.

Nearly half of the $441 million awarded by the National Foundation on the Arts and the Humanities—about $210 million—went to recipients in nine states and the District of Columbia. Most are blue states: California, Florida, Illinois, Maryland, Massachusetts, Michigan, New York, Pennsylvania, and Texas.

Ballets, operas, orchestras, and symphonies received $5.4 million, despite having $5 billion in assets, the report says. Among them: the Boston Symphony Orchestra, the Lyric Opera of Chicago, and the New York City Ballet.

The Met is a public charity with assets of $3.73 billion, according to its 2014 tax forms. The museum’s annual celebrity-studded Met Gala recently raised $300 million, the report says.

The government foundation’s grants also go to a huge cast of art exhibitions and performances, including a series of shows featuring the saguaro cactus hosted by the Borderlands Theater in Tucson, Arizona.

The theater’s “site-responsive performances” celebrate the treelike cactus, which can grow to 70 feet tall. The idea is that guests pay to spend one hour in the Sonoran Desert with the cactus, then share their experience on social media.

Search for “saguaro cactus” on Twitter and it doesn’t appear folks need much government encouragement to share about it:

The National Foundation on the Arts and the Humanities’ $143 million in contributions in fiscal 2016 to charitable organizations included universities with billion-dollar endowment funds such as Harvard, Yale, Northwestern, Notre Dame, and the University of Michigan.

A total of 432 federal employees working for the government foundation earned $41.8 million a year in salaries and bonuses, the report notes. The average salary was $96,500 for fiscal 2016, with benefits increasing the average cost to $126,415 per employee.

Ken McIntyre contributed to this article.