Too Many Government Policies Are Limiting Opportunity for All, and Hurting the Poor 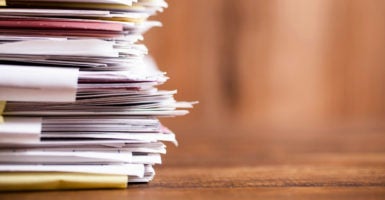 In 2006, 91 percent of Americans were satisfied with the amount of economic freedom in their lives, whereas today that number has fallen to 75 percent. (Photo: iStock Photos)

Policymakers too often think that big government is the only solution to creating opportunity and reducing poverty. They fail to ask how government might be the problem.

In fact, government often cuts off opportunities for many regular Americans, while encouraging cronyism and benefits for those who have the right government connections.

If “draining the swamp” is really a goal, then federal government policies that maintain the D.C. swamp need to be eliminated.

A new Heritage Foundation report, “Trump Administration Should Address Federal Policies That Limit Opportunity and Hurt the Poor,” identifies many federal policies that are making it more difficult for Americans, including the poor, to achieve the American dream.

It also recommends that President Donald Trump take action to help promote opportunity by knocking down obstacles that the policies create.

The policies identified are just the tip of the iceberg, but include those that exist across the federal government. They have an impact on a wide range of issues—including energy, food, housing, and financial services.

Many drive up the prices of these basic needs, making it more difficult to escape poverty or get ahead in life.

The report recommends Trump issue an executive order creating an interagency task force to identify and eliminate federal policies that limit opportunity for all Americans, including the poor.

This task force could be structured similarly to the one Trump created with an executive order to promote agriculture and rural prosperity earlier this year.

When opportunities to advance are hindered, people are less free.

Recent troubling survey data, as well as the econometric data of the Heritage Foundation’s Index of Economic Freedom, support the notion that opportunities and economic freedom are declining in the U.S.

A Gallup poll in 2006 found that 91 percent of Americans were satisfied with the degree of freedom in their lives. Today it’s down to 75 percent.

The Heritage Foundation’s Index of Economic Freedom too has declined precipitously over that same time. (See chart)

Creating an interagency task force to identify and eliminate opportunity-killing government practices and programs would put America back on the path to greater economic freedom and greater opportunities for the poor to rise out of poverty.