Some States Have No Interest in Fighting Voter Fraud 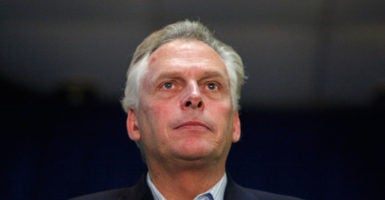 It was a simple request—hardly one to stir up controversy.

Yet the response has been as swift as it is absurd. Liberal activist groups, many media outlets, and politicians—predominantly left-leaning ones—assailed the commission for somehow invading the privacy of American voters.

All three indicated their states will provide no information to the commission. They apparently believe that their voter registration rolls are 100 percent accurate.

They must agree with New York Gov. Andrew Cuomo, who publicly proclaimed voter fraud to be just a “myth”—so why bother investigating it?

If voter fraud were as rare as the left contends, and if adequate procedures are in place to prevent it from occurring, you would think those who make this argument would be anxious to provide the data that would serve to verify their assertions.

Could it be that they fear the data would refute their claims?

Indeed, the evidence points to a different conclusion: Voter fraud is not only real, it is a serious and ongoing threat to the integrity of the electoral process.

Voter registration rolls in some states are in sad shape. They are filled with large numbers of individuals who are ineligible to vote because they are dead, have moved away and registered in a different state, or are not U.S. citizens.

Such inaccuracies can be exploited by fraudsters who would rather cheat to achieve their political objectives, knowing that many states have lax procedures that make it extremely likely that they can commit voter fraud and get away with it.

This is not just a crime against our electoral system, but against American citizens. Every fraudulent ballot that is cast negates the vote of a legitimate voter, effectively disenfranchising that voter.

The U.S. Supreme Court has cited “flagrant examples” of voter fraud in American history to justify its conclusion that “the risk of voter fraud [is] real [and] that it could affect the outcome of a close election.”

In May, the Public Interest Legal Foundation published a startling report on widespread noncitizen voting in Virginia.

The report not only revealed that thousands of ineligible aliens registered and voted in the state’s elections, it also detailed the considerable efforts that state officials undertook to try to block the Public Interest Legal Foundation from obtaining the publicly available voter records the organization needed to complete its investigation.

Once more, Virginia appears to be stonewalling by refusing to comply with the presidential commission’s request, and other states appear to be following suit (although early reports of the precise number of noncomplying states appear to have been exaggerated).

This is disappointing and somewhat surprising, given that federal law requires states to maintain, and make available to the public, the very voter records the commission seeks.

Each state shall maintain for at least two years and shall make available for public inspection and, where available, photocopying at a reasonable cost, all records concerning the implementation of programs and activities conducted for the purpose of ensuring the accuracy and currency of official lists of eligible voters …

Federal law (52 U.S.C. §§ 20701 & 20703) also mandates that election officers must “retain and preserve, for a period of 22 months from the date of any general, special, or primary election” for a federal office all records pertaining to “any application” or “registration” to vote.

The law requires that these records be made available “upon demand in writing by the attorney general … for inspection, reproduction, and copying.”

California is a perfect example of this. Even though California is refusing to provide the requested information, its state election code makes voter registration records, including “home address, telephone number, email Address, [and] precinct number” available to “any voter … to any candidate for federal, state, or local office, to any committee for or against any initiative or referendum … and to any person for election, scholarly, journalistic, or political purposes, or for governmental purposes … ”

In addition to the fact that the commission has only requested publicly available information, those states that are citing the need to protect the privacy of voters as the reason for their noncompliance are being somewhat disingenuous.

After all, voter registration information is routinely purchased and used by political parties and candidates for public office, as well as private companies who use such data for commercial purposes.

Many of the politicians who are expressing outrage at the commission’s request obviously did not have any qualms about obtaining and using such data themselves to further their own political ambitions.

The commission’s request for public voter records is designed to serve one purpose: to allow the comparison of voter records across the states, and with federal databases, such as Social Security Administration’s death records and the Department of Homeland Security’s noncitizen records.

This will help to determine whether state voter rolls are accurate and reliable—an extremely important undertaking given the significant evidence that has emerged suggesting that voter registration records are riddled with errors and duplicate entries.

In 2012, for example, a Pew study concluded that roughly “24 million—one of every eight—voter registrations in the United States are no longer valid or are significantly inaccurate.”

The study estimated that 2.75 million people are registered in multiple states, and 1.8 million deceased voters remain on voter rolls.

Five years later, there is little reason to believe that the problem has corrected itself.

The commission now has an opportunity to update the Pew findings and, if the problem remains, to develop policies and recommendations to facilitate state and federal action to clean up the voter rolls and help secure the integrity of American elections.

Some liberal activists are attacking the commission’s credibility before it even gets started, claiming its purpose is to engage in “voter suppression” and “discrimination.”

Perhaps they can explain how determining the accuracy of voter registration rolls, investigating the numbers of individuals who are illegally voting in multiple states, and identifying noncitizens and others who are ineligible to vote but nonetheless registered constitutes acts of “vote suppression.”

In that regard, it is worth noting that the letter from the commission also requests any information that states have on intimidation of voters or other efforts to prevent eligible Americans from voting.

Rather than helping to investigate and remedy the problems we have in our systems, opponents would rather stick their heads in the sand and pretend there are no problems.

They would also like to tarnish the commission’s reputation with the public in hopes that it will be easier to dismiss its findings later on.

That tells us all we need to know about their motivations. Politics before integrity.

Supreme Court Justice Louis Brandeis once stated that sunlight is the “best of disinfectants.” When it comes to America’s electoral system, truer words have never been said.