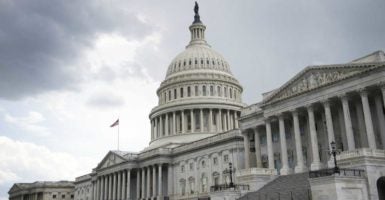 If Congress is serious about following through on its promise to the American people, it has several pathways to pro-growth tax reform. (Photo: Kevin Dietsch/UPI/Newscom)

The tax code is in dire need of reform, but updating it is only one of the many items on Congress’ agenda for the remainder of the year.

Many fear that tax reform may lose out to other priorities. However, if Congress is serious about following through on its promise to the American people, its has several pathways to pro-growth tax reform, as outlined in recently released Heritage Foundation research.

In its current form, the U.S. tax system is destructive to the economy and harms the well-being of every American.

Congress should continue to work from the House GOP blueprint, without the border adjustment tax, as a good foundation for reforming the U.S. tax code. The plan would encourage investment, work, and entrepreneurship. It would promote the growth of the economy, not its destruction.

Pro-growth tax reform that provides relief for American families and businesses, however, faces political and procedural barriers to success. It is unlikely that a standalone bill subject to the 60-vote threshold in the Senate will gain sufficient support for passage.

Most political observers see reconciliation as the most likely path for reform.

The reconciliation process enables Congress to fast-track reform in the Senate, limiting debate and lowering the necessary vote threshold to a simple majority, instead of requiring 60 votes. As outlined in Heritage research, titled “Pathways for Pro-Growth, Fiscally Responsible Tax Reform,” if used correctly, reconciliation can strengthen the permanency of reform and increase the effort’s probability of success.

While reconciliation provides a route for the passage of tax form, members of Congress must pursue deficit reduction or deficit neutrality in order to avoid a point of order against the reconciliation bill.

Two rules pose a potential threat to tax reform in the Senate if the proposed package increased deficits: the pay-as-you-go (PAYGO) rule and the Byrd rule.

The Senate pay-as-you-go rule requires that any legislation that decreases revenues must also include spending cuts, revenue increases, or a combination of the two to remain deficit neutral.

The Senate can waive this rule in its budget resolution, if it so chooses.

The Byrd rule, which is specific to the reconciliation process, requires that reconciliation must not increase the deficit outside the budget window. Waiving this rule is not so easy. Doing so requires 60 votes in the Senate.

By combining reforms that phase in over several years to mandatory spending with tax reforms, Congress can proof its reconciliation bill against the procedural barriers to enactment. This keeps reformers from chasing higher revenues through counterproductive proposals such as border adjustments.

Congress could also include instructions in the budget resolution for a longer budget window of 20 years or more rather than the traditional 10-year period. A Byrd rule point of order would still pertain to the outside years, but a longer window could also allow more gradual spending reforms and additional tax savings.

If Congress does not want to find specific spending cuts this year, it could also impose an automatic sequester to limit the growth of government spending and meet the reconciliation constraints.

To support a review of spending, Congress could create a select committee to meet the spending reduction requirements, enforced by the sequester.

As spending drives growing deficits and debts, Congress should reduce and control spending while simultaneously alleviating the tax burden faced by businesses and individuals.

The rules of reconciliation allow Congress to pursue deficit-neutral tax reform by cutting direct spending through deliberate reforms, automatic sequestration, or a combination of the two.

This article is a condensed summary of a Heritage Foundation backgrounder, “Pathways for Pro-Growth, Fiscally Responsible Tax Reform,” by Romina Boccia and Adam N. Michel.