Democrats Hatch Plans A, B, and C to Impeach Trump 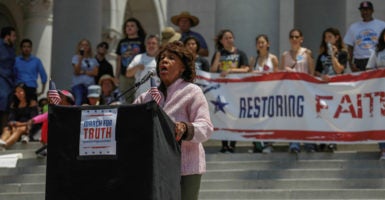 Rep. Maxine Waters, D-Calif., addresses the "March for Truth" rally against President Donald Trump on June 3 in Los Angeles. Waters has been the face of Democrats seeking to remove the president from office. (Photo: John Fredricks/Reuters /Newscom)

It’s a movement that began before President Donald Trump was sworn into office and the drive for impeachment has gone through many iterations.

“They don’t even have low crimes and misdemeanors,” Ken Boehm says.

The earliest rationale was the Constitution’s “emoluments clause,” which came amid loose talk of the Trump campaign’s alleged collusion with Russia and emerged as the dominant theme. In lieu of a smoking gun in the Russian matter, the prevailing justification became that Trump tried to obstruct an FBI probe of his former national security adviser.

MoveOn.org, Democracy for America, and other progressive or “resistance” groups have been advocating for it. Rep. Maxine Waters, D-Calif., appears to have gotten the most airtime of anyone in Congress talking about impeaching the president on talk shows and public events.

But only Rep. Brad Sherman, D-Calif., actually has introduced articles of impeachment. Green’s speech and Sherman’s measure focused on allegations of obstruction of justice.

The House’s Democratic leadership hasn’t taken up the call, in part because such actions are unlikely, based on known facts, to go anywhere in a Republican-controlled Congress.

Before getting elected to anything, Boyd Roberts, a California congressional candidate, filed documents with the Federal Election Commission to start a political action committee called Impeach Trump Leadership PAC, as The Hill reported.

Article II, Section 4 of the Constitution includes “high crimes and misdemeanors” as grounds for impeachment, along with treason and bribery.

But impeachment is ultimately a political question and Republicans control the House of Representatives. Even if Democrats managed to flip the House and Senate in the 2018 election, it would require a majority vote in the House to impeach a president and two-thirds of the Senate to remove a president from office.

Boehm said overheated impeachment talk now will delay justice if the president is involved in a legitimate, verifiable scandal.

“Democrats should save the heavy artillery for substance,” Boehm said. “They run the risk of being the boy who cried wolf if they say ‘impeach’ about everything.”

The early framework was set in December 2016, six weeks before Inauguration Day, when five Senate Democrats—Elizabeth Warren of Massachusetts, Ben Cardin of Maryland, Chris Coons of Delaware, Dick Durbin of Illinois, and Jeff Merkley of Oregon—sponsored a bill that would require the president, vice president, and their family members to divest from anything that could create a conflict of interest.

Adopting a sense of the Congress that the president’s violation of financial conflicts of interest laws or the ethics requirements that apply to executive branch employees constitute a high crime or misdemeanor under the impeachment clause of the U.S. Constitution …

Before he took office, Trump put his liquid properties such as hotels and golf courses into a trust and resigned from official positions with his businesses, turning the Trump Organization over to his adult sons.

In January, a liberal watchdog group, Citizens for Ethics and Responsibility in Washington, began raising questions about Trump’s businesses and the emoluments clause of the Constitution, which states that:

… no Person holding any Office of Profit or Trust under them, shall, without the Consent of the Congress, accept of any present, Emolument, Office, or Title, of any kind whatever, from any King, Prince, or foreign State.

Essentially, the clause prohibits personally profiting from public office. Trump’s children run his businesses now, but there is not a blind trust.

In February, Rep. Jerrold Nadler, D-N.Y., filed a “resolution of inquiry” into Trump’s investments that a Huffington Post column framed as the “first legislative step toward impeachment.”

Citizens for Ethics and Responsibility in Washington, or CREW, filed a lawsuit in the Southern District of New York on Jan. 22, two days after Trump took office.

“We did not want to get to this point. It was our hope that President Trump would take the necessary steps to avoid violating the Constitution before he took office,” CREW Executive Director Noah Bookbinder said in a statement. “He did not. His constitutional violations are immediate and serious, so we were forced to take legal action.”

A spokeswoman for the organization told The Daily Signal she would try to set up an interview with board Chairman Norman Eisen. However, Eisen didn’t respond as of publication deadline.

However, emoluments faded as grounds for impeachment as some juicy stories about Trump and Russia emerged. After a report in The Washington Post accused Trump of talking about classified information with two Russian officials in the Oval Office, Waters said it rose to the level of impeachment.

In May, Waters referred to that alleged sharing of secrets during the Oval Office discussion at the Center for American Progress, a liberal research organization. The California congresswoman said:

Yet another major story occurred after Trump fired FBI Director James Comey while the bureau’s Russia investigation was going on. Some politicians and commentators compared to President Richard Nixon’s “Saturday Night Massacre,” the multiple firings related to the investigation of the Watergate scandal.

Through a leak Comey admitted to planting, Americans learned of his accusation that the president asked him to “let go” of the FBI’s investigation of his former national security adviser, Michael Flynn, for misrepresenting his pre-inaugural conversations with the Russian ambassador.

Democrats were quick to suggest this amounted to obstruction of justice.

Sen. Angus King, I-Maine, who caucuses with Democrats, was asked by CNN’s Wolf Blitzer: “If these allegations, Senator, are true, are we getting closer and closer to the possibility of yet another impeachment process?”

King replied: “Reluctantly, Wolf, I have to say yes, simply because obstruction of justice is such a serious offense.”

Obstruction of justice has a significant place in impeachment history. President Bill Clinton was impeached on this charge in the House in 1998, and it was the basis of one article of impeachment passed by the House Judiciary Committee in 1974 before Nixon resigned.

Obstruction of justice also is the basis for Sherman’s impeachment draft.

Comey told the panel the president didn’t order him to drop the case and, when questioned, said he knew of no prosecution based on someone’s “hope.”

Numerous legal scholars said they didn’t believe there was a viable obstruction charge based on the Feb. 14 Oval Office conversation between Trump and Comey.

With an impeachment case based on Russia and obstruction of justice not as strong, emoluments made a comeback in June.

“The I-word is not something you should throw around that much, and the Democrats are playing fast and loose with the emoluments lawsuits, where the merits are weak and the standing claims are laughable,” John-Michael Seibler, a legal fellow in the Edwin Meese III Center for Legal and Judicial Studies at The Heritage Foundation who has written about Democrats’ various suits, told The Daily Signal.

Maryland Attorney General Brian Frosh and District of Columbia Attorney General Karl Racine, both Democrats, sued over the emoluments clause, accusing the president of violating the Constitution regarding foreign governments doing business with the Trump International Hotel in Washington.

“The lawsuits would define emoluments so broadly [that the provision] would be used against anyone,” Seibler said. “It’s basically an op-ed before the court.”

“You look at the bill Sen. Warren sponsored,” he added. “The lawsuits ask for declaratory judgment to fill in very wide gaps and reasoning.”