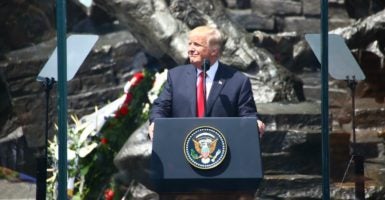 If President Trump carries through with a campaign to defeat the multicultural assault on Western civilization, he would be finally responding to what has been a sustained and, so far, singularly successful leftist attempt to fundamentally transform America and her European allies. (Photo: Jakob Ratz/ZUMA Press/Newscom)

Western values, Judeo-Christian at base but also to some degree influenced by Greco-Roman views on philosophy and politics, are under threat from within by a nihilist “Hey, Hey, Ho, Ho, Western Civ has got to go” mentality. President Donald Trump told Poles fighting a version of that mindset that he was with them—and the American left had a freakout.

Said freakout is, to be honest, well deserved. If Trump carries through with a campaign to defeat the multicultural assault on Western civilization, he would be finally responding to what has been a sustained and, so far, singularly successful leftist attempt to fundamentally transform America and her European allies.

Only time will tell if Trump has the intestinal fortitude needed to see through such a mission. Undoubtedly the left will fight back with all its might not to lose gains it has made across all the cultural institutions since the 1960s.

And if the screeching response by not a few liberals to Trump’s speech Thursday in Warsaw is anything to go by, that counterattack has already started. They’re using the most powerful weapon in their arsenal, the one that aims to not chill but freeze debate: Trump’s speech was, you guessed it, racist.

I try to make time to read The Atlantic’s Peter Beinart and The Washington Post’s Jonathan Capehart, liberal commentators who sometimes make original points. Beinart’s essay on multiculturalism in the current issue of the magazine courageously points out that “Liberals must take seriously Americans’ yearning for social cohesion.” (It takes courage for a liberal to say these things to his own ilk).

But Beinart’s breathless reaction to Trump’s speech was something else. He took Trump to task for mentioning the words “the West” 10 times and “our civilization” five, which are of course dog whistles: “His white nationalist supporters will understand exactly what he means,” wrote Beinart.

I fault Beinart for not using another word, except when he’s quoting Trump: “culture.” To Beinart, “The West is a racial and religious term.” Democracy and capitalism, he said, “are not the property of any particular religion or race.”

Democracy and the free-market system may indeed be portable, and exportable to all corners of the world (at least I hope so). But is Beinart really blind to the fact that they are the legacies of the Gospels, the Talmud, Homer, Cicero, Locke, Hobbes, Adam Smith, Montesquieu, and many others?

Not to be outdone in the hyperventilation department, Capehart’s response, headlined “Trump’s white-nationalist dog whistles in Warsaw,” takes issue with the following presidential line, “We write symphonies.”

“In that one line, taken in context with everything else Trump said, what I heard was the loudest of dog whistles. A familiar boast that swells the chests of white nationalists everywhere,” wrote Capehart.

Has Capehart really ever met a white nationalist? In my recollection, they don’t go around whistling Stravinsky or Tchaikovsky.

Finally, over at Vox, Sarah Wildman wrote that the speech “often resorted to rhetorical conceits typically used by the European and American alt-right” in an article whose headlined blared the speech was “an alt-right manifesto.” The whistle to her were the dread words “[for] family, for freedom, for country, and for God.”

Memo to liberals: When everything is alt-right, nothing is. There are real uglies out there, and you’re not doing the country a favor with these hyperbolic explosions. As Matt Lewis wrote over at The Daily Beast:

I guess if leaders like Winston Churchill, Franklin Roosevelt, and Ronald Reagan constitute alt-right populists then it would be fair to consider Trump’s speech in that tradition.

In fact, these reactions can be nothing less than a panicky realization that the “The Long March Through the Institutions”—the cultural Marxist Rudi Dutschke’s formula to subvert Western institutions from within—may finally find resistance.

Contra Beinart, this would be an attempt to save capitalism and democracy by saving the culture that produced them.

When Trump called for Americans, Poles, and “the nations of Europe” to “work together to confront forces, whether they come from inside or out, from the South or the East, that threaten over time to undermine these values and to erase the bonds of culture, faith, and tradition that make us who we are,” it was well understood—by those who want to save liberal democracy.

The president picked his audience well. Poland, partitioned by the rival powers of Russia, Prussia, and Austria, was eliminated as a sovereign state between 1795 and the end of World War I in 1918. It was again divided between Soviet Russia and Nazi Germany during World War II, and then from 1945 to 1989 was a Soviet satellite.

But the Polish nation was never eliminated because Poles stubbornly hung on to their culture, their Roman Catholic religion, and their language through the mediating institutions of the church and the family.

Today, again, it is being browbeaten by the European Union, as Brussels tries to force Warsaw to accept its diktats on family and social cohesion. Trump went to Warsaw to let Polish citizens know he was with them in this struggle.

Trump’s speech included many other good things: an embrace of NATO’s Article 5 clause on mutual defense, a warning to Russia to cease its global destabilizing activities, and a rallying cry against terrorism.

But it was his dog whistles for those who want to see Western values succeed, and have a chance to be exported, that were more important.