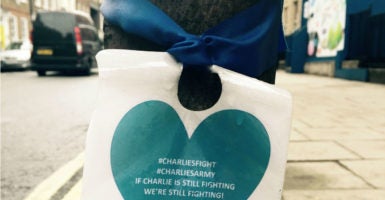 “Our bill will support Charlie’s parents’ right to choose what is best for their son, by making Charlie a lawful permanent resident in the U.S. in order for him to receive treatments that could save his life,” Reps. Brad Wenstrup, R-Ohio, and Trent Franks, R-Ariz., said in a joint statement Friday.

Charlie, 11 months old, has an uncommon genetic condition that keeps him from breathing without help. He is also deaf and blind.

“Despite Charlie’s heartbreaking condition, his parents have refused to give up hope,” Wenstrup and Franks said. “They have advocated for him fiercely. They have raised over 1 million [pounds] to pay for their son to receive experimental treatment in the United States. They have kept fighting for his life.”

The European Court of Human Rights decided June 27 that Great Ormond Street Hospital could remove life support from Charlie. The London facility has been caring for Charlie since October and planned to take him off life support.

Charlie’s parents, Chris Gard and Constance Yates, want to bring their son to the United States to undergo treatment of his disease, known as infantile-onset encephalomyopathic mitochondrial DNA depletion syndrome. The couple has raised nearly $1.7 million on GoFundMe for expenses related to his treatment.

The Vatican’s Bambino Gesu Children’s Hospital offered to care for Charlie, but the London hospital denied the request Wednesday, The Atlantic reported.

British Prime Minister Theresa May told the House of Commons that Gard and Yates,  as Charlie’s parents, are in an “unimaginable situation” as they try to do what’s right for their son while doctors make “heartbreaking decisions,” Fox News reported

“Every human life has dignity, including the lives of those who cannot speak up for themselves,” Wenstrup and Franks said, adding:

When government is able to overrule a parent or guardian in determining a patient’s best interest, every vulnerable patient is put at risk. We offer Connie Yates and Chris Gard our heartfelt support as they seek to care for their son.