Trump Says West Must ‘Fight Like the Poles.’ Meet the Polish Soldier Who Fought for Our Freedom. 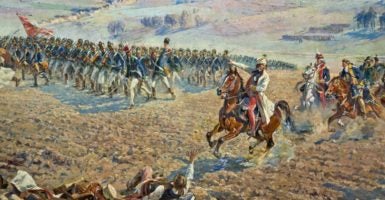 “Together, let us all fight like the Poles—for family, for freedom, for country, and for God.”

Those were the words of President Donald Trump as he delivered a speech at Warsaw’s Krasinski Square in central Poland. Trump highlighted both the longstanding connection between the United States and Poland, as well as the enduring need for the West to stand strong in the face of tyranny.

In a clear reference to the menace of Islamist terrorism, Trump said: “Our own fight for the West does not begin on the battlefield—it begins with our minds, our wills, and our souls.”

Poland knows what it means to encounter a threat. It faced the twin evils of Nazism and communism during the 20th century, starting when Germany and the USSR invaded in 1939 and ending with the fall of the Iron Curtain in 1991.

These two monstrous ideologies were defeated by both force of arms and, more importantly, the force of ideas.

In some ways, Trump’s words echoed those of President Ronald Reagan—a beloved figure in Poland to this day—who was instrumental in advocating principles that would bring an end to Soviet rule throughout the Eastern bloc.

But the Cold War was not the first time Americans and Poles stood together in a global struggle for freedom.

One nearly forgotten hero of the American Revolution was a Polish military engineer who became world-renowned not just for his prowess on the battlefield, but his advocacy for the universal principles of liberty.

Many Americans know about France’s contributions to the revolution, and the noble service Marquis de Lafayette rendered this country in its earliest days.

Yet Poland was also one of America’s earliest backers. Poland sent some of its venerated sons to our shores in our struggle for freedom, who brought some of their own ideas with them.

Casimir Pulaski, the noble Polish cavalryman who died from wounds sustained at the Battle of Savannah, still retains some amount of notoriety in the U.S. as the “Father of the American Cavalry.”

But another Polish hero was perhaps even more instrumental in securing military victory against the British—and certainly became more important in the global struggle for liberty.

Tadeusz Kosciuszko, whom Trump paid tribute to in his speech, fought alongside soldiers in the Continental Army and now has a statue standing in Washington, D.C.

Though a noble by birth, Kosciuszko believed strongly in the principles of the American Revolution. He had been trained as a military engineer, a rare skill in the American colonies, so he decided to use his talents to aid the revolutionary cause.

Though he had no contacts in America, Kosciuszko boldly crossed the Atlantic and approached Benjamin Franklin, asking for a commission in the Continental Army.

Franklin was amused by the fact that Kosciuszko had traveled all that way with no recommendations or connections, but he immediately identified the young Pole’s training as a military engineer as an asset to a nation mostly comprised of farmers.

Kosciuszko fought bravely under the command of Gen. Horatio Gates, and his skills proved instrumental in a number of battles. He designed fortifications that proved to be a key element to the American victory at the Battle of Saratoga—a critical turning point in the war.

But Kosciuszko’s most important contribution to the military effort came in designing the defenses around West Point, a vital installation that would become the premier U.S. school for the Army. The plan, which Kosciuszko toiled over for over two years, made the fortress near impregnable.

In fact, it was Kosciuszko’s well-laid plans that notorious traitor Benedict Arnold tried to undermine and hand over to the British before he was discovered.

Sadly, as historian Alex Storozynski noted in his biography of Kosciuszko:

While the story of the infamous traitor Benedict Arnold is taught in schools across America, the prize he was trying to sell to the British, Kosciuszko’s handiwork of two and a half years in the Hudson Highlands, has been but a footnote in history books.

A prominent statue of Kosciuszko stands at West Point today, yet he is rarely recognized by the general American public.

Kosciuszko would go on to not only be a hero of the American Revolution, but a critical figure in the revolutionary fervor that gripped Europe.

Upon his return to Poland, he became a prominent backer of creating a constitution modeled on the recently ratified Constitution of the United States.

In fact, it was Poland that became the first European country to adopt a codified constitution in 1791.

Sadly, liberty was short-lived in Poland, as the country was soon conquered by Russia.

Kosciuszko’s uprising in opposition to Russian rule failed. But this did not dampen his belief that the idea of freedom was both true and good, and he remained a ferocious critic of tyranny in all forms—including serfdom and slavery—for the rest of his life. These ideas flowed from his faith in the natural, God-given rights that Thomas Jefferson described in the Declaration of Independence: “self-evident” truths that stand as a rebuke to tyrants everywhere.

The West endures because of the strength and principles of men like Kosciuszko and Reagan. It is not enough to merely be great in battle, or have powerful armies to command. The West survives because of the concept of human freedom that undergirds it.

In the face of relentless pressure from Islamists and others who wish to destroy our way of life, it is all-important that we don’t lose sight of our values. We must believe our cause is just, and we will undoubtedly have to fight—much like Kosciuszko.