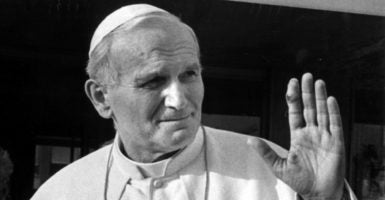 Pope John Paul II raises his wounded hand in greeting well-wishers as he leaves a hospital on June 3, 1981. (Photo: Reuters/Newscom)

A scholar of Ronald Reagan’s presidency says that by publicizing Moscow’s role in the 1981 attempted assassination of Pope John Paul II, he hopes to prompt President Donald Trump to hold Russia accountable for what has been called “the crime of the century.”

Paul Kengor, a professor of political science at Grove City College, writes about the bond that drove Reagan and John Paul II to confront communism in his latest book, “A Pope and a President: John Paul II, Ronald Reagan, and the Extraordinary Untold Story of the 20th Century.”

As previously reported by The Daily Signal, Kengor’s book explores what he sees as evidence that Russian foreign intelligence officials masterminded the plot to shoot and kill the pontiff.

“[Soviet intelligence] ordered the assassination of the pope, and it’s finally time that we’re told about this and precisely what happened,” Kengor said in an email to The Daily Signal after his June 29 speech on the topic at The Heritage Foundation.

Kengor’s point of departure is Oct. 16, 1978, when the College of Cardinals selected a new pope from Poland—“right smack out of the middle of the communist bloc,” as he put it in his Heritage speech.

Kengor, also executive director of Grove City College’s Center for Vision and Values, said Karol Wojtyla’s ascension to pope worried anti-religion leaders in the Soviet Union, who attempted to prevent his return visit to Poland in 1979.

“No one was saying that at the time,” Kengor told his Heritage audience, referring to the pope’s support for freedom from communist rule.

News outlets such as The New York Times reported that John Paul’s visit meant little to the political order in Eastern Europe. But Reagan, then running for president and watching TV coverage “with tears in his eyes,” Kengor added, said John Paul was the key to communism’s downfall.

In 1979, the nine members of the Soviet Central Committee—including future Soviet leader Mikhail Gorbachev—issued an edict to “use all possibilities” to obstruct the pope’s aims, Kengor said at Heritage.

“It was essentially an assassination order,” he said.

Struck twice, Kengor recalled, the pope’s final question before losing consciousness in the hospital was: “How could they do it?”

The author says he believes that by “they,” the pope referred to Soviet communist leaders.

Days after the shooting of the pope, Kengor said at Heritage, Reagan may have hinted that he suspected Soviet involvement, when the president warned Notre Dame graduates against “certain economic theories that use the rhetoric of class struggle to justify injustice.”

The Guardian, a leading British newspaper,  speculated about Moscow’s role in 1981, suspicion denied at the time by Soviet outlets.

The Reagan administration later performed a top-secret CIA investigation, which Kengor calls the “blockbuster” of his book, culminating in what he describes as still-classified documents that concluded the Soviets’ Main Intelligence Directorate planned the pope’s murder. It remains an important Russian security agency.

The Soviet Union crumbled after Poland’s 1989 elections yielded disaster for the communists; as Reagan and John Paul had suspected, the pontiff’s homeland was key to bringing freedom to Eastern Europe.

Kengor says a trusted source told him that John Paul asked Reagan not to publicize the Soviets’ role in the assassination attempt because he didn’t want to jeopardize dialogue with the new Soviet leader, Gorbachev.

In an email to The Daily Signal, he also urged the president to assert himself with Russian President Vladimir Putin by using his bully pulpit—including Twitter—to expose the Kremlin’s role in the shooting of the pope. The president is scheduled to have his first face-to-face meeting with Putin on Friday.

Trump “wants to assert himself and show he’s no lapdog to Putin and the Russians,” Kengor said, adding:

Well, he could do that—and, more important, simply do a great good—by pushing the Washington bureaucracy and even the Russians to release the information they’ve been holding for over 30 years on what was rightly called the crime of the century.

Watch Kengor’s speech at Heritage and a question-and-answer session here.