Congress Should Protect Taxpayers, Not Cave to Agricultural Special Interests, in Next Budget 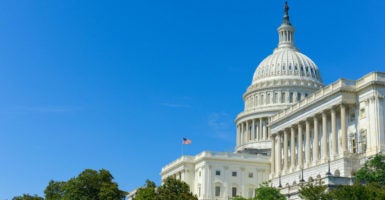 The House and Senate agriculture committees, as evidenced by their recent farm bill hearings and complaints about wanting more handouts, seem to be focused on funneling money to agricultural special interests—even at the expense of taxpayers and consumers.

There needs to be a check on these committees so that the interests of taxpayers and consumers are at least taken into account.

The House budget is one way to provide this necessary check on the agriculture committees, especially since the next farm bill is expected in 2018.

Unfortunately, recent reports suggest that such a check may not exist in the current House budget, with the House Agriculture Committee directed to cut as little as $8 billion over 10 years (fiscal years 2018-2027).

If this turns out to be the case, this would be half of the miniscule $16.5 billion in savings that were projected for the 2014 farm bill when it passed. It doesn’t even amount to a 1 percent reduction when compared to the projected 2018-2027 mandatory farm bill spending.

The problem is that certain legislators not only want to keep the handouts going, they want to increase them. When it comes to the budget, they claim that agricultural producers paid their fair share through the 2014 farm bill and shouldn’t have to do any more.

To make their case, they use recent dips in food stamp costs to try to make it look like farmers have paid their dues.

This effort to conflate the issues is just another reason why food stamps and agricultural programs need to be separated and considered in separate bills.

Although food stamp costs have come down a little since 2013 (they cost $73 billion in 2016), food stamp spending was still close to double what it was in 2008.

The latest projections show the four largest titles of the farm bill (about 99 percent of the farm bill costs) will save more than what was originally projected for the five-year farm bill, but almost all of that is connected to food stamps ($27.3 billion of the $30.8 billion in savings).

These food stamp savings have generally been attributed to a better economy, not the 2014 farm bill.

Now that there has been a minor reduction in the still-massive amount of food stamp spending (it is still near record highs), some legislators want to use those “savings” to provide cover for keeping or even expanding farm handouts.

This charade needs to be called out. Congress though should primarily be dedicated to developing sound policy, which as a result will lead to real savings.

When it comes to farm handouts, Congress should develop a properly focused safety net which, at most, assists farmers when they experience major crop losses.

Taxpayers shouldn’t be forced to help agricultural producers manage the same business risks that a mom and pop shop has to manage on a daily basis.

The 2014 House budget plan had it right when it stated with regard to farm programs, “Taxpayers should not finance payments for a business sector that is more than capable of thriving on its own.”

The new House budget should reflect this important point and address the agricultural cronyism that comes at the expense of taxpayers.