Flags of Steel: How a Combat Veteran Works to Unite Americans 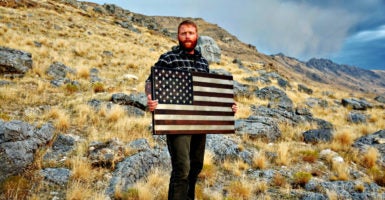 An Air Force veteran in Utah uses his talent and passion to make, display, and sell images of the one thing he believes can help unite Americans: the nation’s flag.

Creating the flag out of steel is his way of bringing people together, Josh Vandenbrink says in an interview with The Daily Signal, and of being a part of the dialogue in politics without getting directly involved.

“It’s a way to connect with the community,” Vandenbrink says, on “common ground [because] we can all love the flag.”

Vandenbrink served in Air Force special operations as a pararescueman, deploying 21 times over 14 years to the Middle East and Africa. Now he runs Iron Mountain Designs, which describes itself as a quality furnishing company that creates pieces for homes, businesses, and public spaces.

As a civilian, Vandenbrink moved from Arizona to Utah with his wife, a former Army helicopter pilot, to take a job with a company that produces survival videos, Deseret News Utah reported. He realized this was not what he wanted to be doing, however.

Growing up, Vandenbrink, 37, had learned building and fabrication skills from family members in the construction business. One of his fondest memories is holding a flashlight at age 6 as his father worked on the family car.

With that knowledge, plus the resourcefulness he learned in the military, he started Iron Mountain Designs in 2015 in Salt Lake City.

The business has gained widespread recognition for its American flags created out of raw, American-made steel. Instead of paint, Vandenbrink uses a chemical process that manipulates rust to create colors for what many consider beautiful pieces of art.

Vandenbrink began creating the flags about two years ago, after some military buddies made fun of him for having a cheap flag from Walmart at his workstation in a previous job. Having grown up in a patriotic family, he explains, it was second nature to have a flag at his workstation.

So he decided to create a flag of his own, devising the steel design and chemical process. It quickly became a top seller at his new business.

Then about two years ago, with orders to fill, Vandenbrink had a seizure that doctors said was related to combat-related brain injuries. As a result, he says, he forgot the exact method he had devised to create the steel flags.

Rather than inform clients he would be unable to fill their orders, Vandenbrink says, he took three months to relearn how he had done it.

Ever since, his business has continued to create the flags and other custom pieces, gaining more attention from exposure by media outlets such as Fox News.

Each flag, Iron Mountain Designs’ most popular item, takes roughly one week to create out of steel. Vandenbrink is the only one who applies the colors.

Clients come in whom he otherwise probably would never meet, Vandenbrink says, people whose view of America he might not understand, but they buy “the same thing for the same reason”—for “love of the flag.”

For flag orders before July 4, Vandenbrink donated 5 percent of proceeds to the Special Operations Warrior Foundation.

The flag, and what it symbolizes, he says, can remind all Americans that “we are actually one team here, and [we can] find solutions that help everybody.”