Sugar Subsidies Are a Lose-Lose for American Workers and Consumers 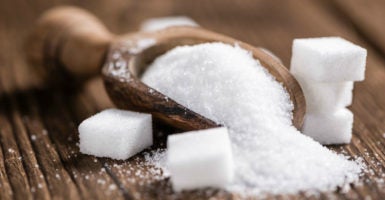 Since 2000, the U.S. sugar program has cost Americans over $47 billion in higher prices. (Photo: iStock Photos)

Erin Bardin is a member of the Young Leaders Program at The Heritage Foundation.

President Donald Trump recently suggested: “Sugar deal negotiated with Mexico is a very good one for both Mexico and the U.S. Had no deal for many years which hurt U.S. badly.”

New Sugar deal negotiated with Mexico is a very good one for both Mexico and the U.S. Had no deal for many years which hurt U.S. badly.

That lack of “deal” Trump refers to involves a dispute over imports of sugar from Mexico. A more significant issue is the U.S. sugar program, a scheme that can best be described as the “OPEC of sugar.”

OPEC (the Organization of the Petroleum Exporting Countries) enriches oil producers by setting caps on petroleum production. The U.S. sugar program does the same thing for sugar producers.

Each year, U.S. Department of Agriculture bureaucrats decide how much sugar Americans can import. Any amount above this is subject to prohibitive import taxes.

To get a picture of why this policy is so problematic, consider the unnecessary costs to consumers. Since 2000, the sugar program has cost Americans over $47 billion in higher prices—all just to placate domestic sugar producers.

The program also destroys jobs in sugar-using industries as companies relocate to other countries to get more affordable sugar.

For example, when production of some Oreo cookies (biggest ingredient: sugar) moved from Chicago to Mexico, 600 Americans lost their jobs.

While some Americans do receive job protection from the sugar program, the job losses far outweigh jobs saved. According to a 2006 report from the International Trade Administration, nearly three jobs in confectionery manufacturing are lost for every sugar growing and harvesting job protected.

The sugar program is a good example of the type of crony capitalism that most Americans despise. The government purposefully distorts the sugar market by picking winners (sugar producers) and losers (American consumers and manufacturers).

The program also causes trade disputes that can result in complex deals, like the one Trump recently referred to.

Commerce Secretary Wilbur Ross commented: “We have gotten the Mexican side to agree to nearly every request made by U.S. industry to address flaws in the current system and ensure fair treatment of American sugar growers and refiners.”

But according to the Sweetener Users Association: “Even tighter controls on the total volume of sugar in U.S. market will force sugar prices higher than current domestic prices, which are already at least 80 percent higher than world market prices.”

Americans deserve a much sweeter deal: End the U.S. sugar program once and for all.