Educational Freedom for Our Warriors in the Land of the Free 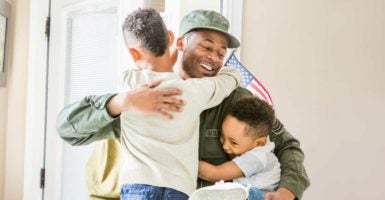 According to a recent survey by the Military Times, 35 percent of respondents said that dissatisfaction with their child’s education was a “significant factor” in their decision to remain in or leave military service. (Photo: Mike Kemp Blend Images/Newscom)

When our Founding Fathers drafted the Declaration of Independence and the Continental Congress adopted it on July 4th, 1776, they declared themselves a nation built on the principles of human freedom and limited, representative government. For years, they fought the British and gave their lives to confirm this independence.

Now, 241 years later, our military families continue to give their lives to secure our freedom. As we celebrate this Independence Day and thank the men and women of our armed services, let’s also consider ways we can improve freedom and opportunity for our military families as they serve.

All military members volunteer to deploy into harm’s way. For a service member preparing for deployment or already deployed far from home, the education options available to their children can be a point of great concern. The schooling options available to military-connected children can play a role in whether a family accepts an assignment, even factoring into decisions to leave military service altogether.

According to a recent survey conducted and published by the Military Times, 35 percent of respondents said that dissatisfaction with their child’s education was a “significant factor” in their decision to remain in or leave military service.

In fact, the Pentagon’s changes to policy in 2016 enabling families to remain at duty stations for longer time periods was a direct response “to complaints by military parents who are loathe to move if the next duty station has poorly performing schools.”

These complaints may often stem from the fact that military-connected children are assigned to the district schools closest in proximity to military bases, regardless of whether those district schools are right for them.

As important as education is to military parents, more than half of all active-duty military families live in states with no school choice options at all.

Imagine if instead a military family could access a portion of those funds through an account with their name on it. Active-duty military families would have access to a parent-controlled education savings account, populated with the federal funds that would have been spent on their child in the public system, which could be used for private school tuition, online learning, special education services and therapies, private tutors, textbooks, curricula, and any other education-related services of their choice.

Like their civilian family counterparts, children of military families deserve choices in education.

Modernizing the Impact Aid Program by transitioning funding into parent-controlled education savings accounts would provide children of active-duty military families with education choice, while ensuring the federal program serves military families as well as they serve us.

When our Founding Fathers drafted the Constitution, they made national defense a paramount responsibility of the new federal government. As we celebrate the birth of our great nation, let’s strengthen our national defense by supporting military families with educational freedom.