Why Americans Feel Less Free Today Than 10 Years Ago 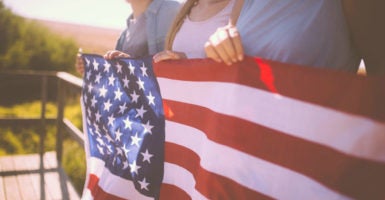 Between 2006 and 2016, the United States fell from 11th to 71st in Gallup rankings when it came to being satisfied with the freedom to make one's own life choices. (Photo: iStock Photos)

Americans are increasingly dissatisfied with the amount of freedom in their lives.

When Gallup asked them in 2006, 91 percent of Americans said they were satisfied with the amount of freedom they have. That compares to just 75 percent who say they are today. Americans also feel less free compared to those in other countries. Gallup reports that in 2006, the U.S. ranked 11th out of 118 countries when asked, “In this country, are you satisfied with your freedom to choose what to do with your life?”

According to the 2017 Index of Economic Freedom, “The substantial expansion in the size and scope of the U.S. government, increased regulatory and tax burdens in many sectors, and the loss of trust and confidence that has accompanied a growing perception of cronyism have severely undermined America’s global competitiveness.”

The size of government is certainly a problem. Federal, state, and local governments spent an astonishing 37.7 percent of America’s gross domestic product in 2015. That’s over 37 cents of every dollar Americans produced in 2015.

Americans know best how to spend or invest the fruit of their own labor, but the government is making them less free by deciding for them how to spend it.

As the Index of Economic Freedom also alludes to, the burdensome regulatory environment is a hidden tax on Americans. Unnecessary regulations prevent Americans from improving their lives by directing them to spend money on compliance costs that they would otherwise choose how best to deploy.

As Americans prepare to celebrate this Fourth of July, it’s time to re-evaluate the size and scope of government relative to the economic freedom being taken away.

Reforming taxes, repealing regulations, and getting the government out of the nooks and crannies of Americans’ lives—where it does not belong—is the much-needed and long overdue solution.