Trump Is Taking Steps to Help the Nuclear Power Industry. Here’s What Can Be Done. 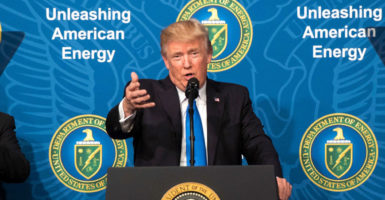 President Donald Trump spoke at the Department of Energy on Thursday, where he announced "a complete review of U.S. nuclear energy policy." (Photo: Sipa USA/Newscom)

President Donald Trump spoke on Thursday about what can be done to help the commercial nuclear power industry as part of Energy Week.

“A complete review of U.S. nuclear energy policy will help us find new ways to revitalize this crucial energy resource,” the president said in remarks at the Department of Energy.

The timing is apt, as the nuclear industry has hit rough times.

Bloomberg New Energy Finance reported earlier this month that over half of nuclear power operators are losing money for a collective loss of roughly $2.9 billion per year. In the past five years, a series of plants have closed or announced closure years before their operating licenses expired.

And yet, the 99 reactors in America offer the reliable and efficient electricity available. Nuclear power provides roughly 20 percent of the electricity Americans use—it takes over 7,500 power plants to cover the other 80 percent.

For all the electricity they produce, nuclear power plants have a small physical footprint. There are virtually zero pollutants. Its benefits have even won over anti-nuclear activists like former Environmental Protection Agency Administrator Carol Browner.

Facing a precarious future, the nuclear industry too often resorts to big government solutions like tax credits and renewable portfolio standards—the thinking being that if renewable energy gets them, why can’t nuclear?

One almost can’t blame them for playing the lobbying game for government handouts.

But leaders in Washington should know better than to solve one problem by compounding it with another. The nuclear industry’s inability to respond, even with its own “free money” on the table for new nuclear plants, should be a signal to politicians that there are deeper issues plaguing the industry.

For all the benefits nuclear power plants in America have provided over the past 60 years, the federal government needs to be willing to do what it takes to regulate this industry appropriately, and then let it succeed or fail on its own merits.