Getting the Opioid Epidemic Right 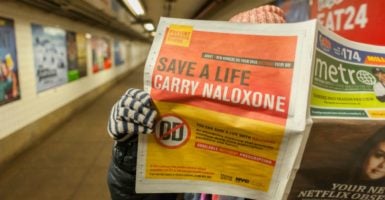 A commuter reads a newspaper with a New York Department of Health ad urging people to carry naloxone, an antidote for an opioid overdose. As an opioid epidemic spreads, health departments are urging the carrying of naloxone on the off chance one encounters an overdosed addict. (Photo: Richard B. Levine/Newscom)

William J. Bennett was the first director of the Office of National Drug Control Policy and later served as U.S. secretary of education. He is a senior adviser to Americans for Responsible Drug Policy.

Robert L. DuPont, MD, is the president of the Institute for Behavior and Health and was the first director of the National Institute on Drug Abuse. He is a senior adviser to Americans for Responsible Drug Policy.

The numbers are staggering. Until about a month ago, we had thought drug overdoses were responsible for some 52,000 American lives in 2015. Now the most recent reporting reveals that number may be closer to 60,000 in 2016.

Think about that: We could now build the equivalent of one Vietnam Memorial Wall a year given the carnage we are wreaking on ourselves with drug abuse.

The majority of these drug overdoses are opioid-related, and there has been a fair amount of reporting on them. But, given the rising death toll—much greater than the crack cocaine epidemic of the 1980s—not nearly enough. And not nearly enough has been said by our political or cultural leaders. When it is discussed, too often the narrative is wrong and the solutions too singularly focused.

Of course we must police pill mills, we must train physicians better on the risks of overprescribing, and we must have state medical boards become more aggressive in policing the unscrupulous.

But the near-exclusive attention on the medical and prescribing part of opioids is insufficient.

For example, nearly 70 percent of our nation’s opioid deaths do not come via prescription abuse. In 2015, there were 33,091 opioid overdose deaths. Heroin deaths constituted 12,990 of those deaths. Synthetic opioids (mostly illegal fentanyl) constituted another 9,580 deaths.

The main problem today, and the growth for tomorrow, is illegal opioids such as heroin, illegal fentanyl, and a hundred other synthetics, not legal drugs used illegally or in ways not as prescribed.

If we are going to tackle the opioid issue head-on, we must take illegal drugs head-on, with strategies aimed at better border enforcement, better monitoring of international mail services, and a crackdown on cartel activity, both here in America and in source countries.

Second, most of the talk and money spent on our current crisis is on treatment, recovery, and urgent overdose reversal. All are important. But simply improving access to treatment is not enough. We need to improve engagement in treatment, reduce dropout, and address the far too common outcome of relapse with sustained recovery—meaning no use of alcohol, marijuana, or other drugs.

But the main unaddressed nature of the opioid crisis is focus and energy on prevention.

Unlike many other chronic diseases, addiction is entirely preventable. Too few are talking about or spending time on stopping the problem before it starts. We must save every life we can, but to focus exclusively on treatment and recovery at the expense of prevention is like building prosthetic limb stores on shark-infested beachfronts. We need to warn people not to swim in those waters and we need to kill the predatory sharks.

We need look only to the recent past as a guide for today. We had major drug problems in this country in the late 1970s and 1980s. The nation rolled up its sleeves, went to work, talked about it, taught about it, and reversed it—and by 1992 we had cut drug use in half, and even more in some age groups.

But it took a national, kitchen sink strategy: Hollywood got involved, professional athletics got involved, and even presidents talked about it and gave speeches on it. Law enforcement was key, but so was direct messaging to the public at large.

That means getting serious about the goal for youth of no use of alcohol, tobacco, marijuana, or other drugs. That is where 90 percent of addiction starts. This clear prevention message needs to come from parents, educators, political leaders, the entertainment industry, and health care professionals—just as in the late 1980s and early 1990s.

So let’s get the problem right and let’s get the solution right. In addition to our focus on recovery outcomes, we must work to dissuade people from taking illegal drugs or diverting legal drugs illegally in the first place.

We must also work on Mexico eliminating its poppy crops and drug cartels. We must go after them here, and hard, as well. And as we educate the public about what is in their medicine cabinets, we must also educate about how serious and dangerous are the drugs that are not given to us by our doctors but bought and sold on the street.

In sum, let us commence a strategy to stop the problems of abuse before they start. It will take a nationwide effort, from the president’s bully pulpit down to local community messaging. It worked before and we see no reason why it cannot work again. The carnage, at this point, is too great not to try.