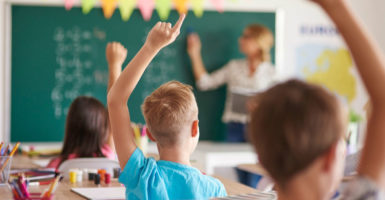 Two new studies show that over time, students attending private schools on a voucher are likely to catch up with their public school peers. (Photo: iStock Photos)

Time heals all wounds—except, it seems, in the research world.

Opponents of parental choice in education, like publicly funded K-12 scholarships and vouchers, are not satisfied by new research findings showing that private school choice is working.

It’s not enough that students using a voucher to attend private school are catching up to their peers in public schools. Private school scholarship students are still “not posting amazing gains,” in the words of school choice opponent Diane Ravitch.

Apparently, it’s not enough to catch up to your public school peers if you attend a private school. You have to be “amazing.”

One would think that parents of children who posted failing grades at a public school would be thrilled to see any improvement in their child’s new setting.

Fortunately, studies released this week from Indiana and Louisiana find that the longer students attend a private school using a voucher, the more likely they are to catch up to their public school peers.

The Louisiana study finds that students using a voucher showed no significant change in their English and math test scores after three years.

This is good news—two previous evaluations of the Louisiana Scholarship Program found that voucher participation had a negative impact on student test scores during the first two years of participation. Yet by year three, researchers found students “recovered substantially” from the initial achievement losses.

Furthermore, students who were scoring lower than their peers when they applied for a voucher showed significant increases in English language arts (reading) scores after the third year.

But we should remember that an education is more than a test score. Parents can have all kinds of reasons aside from test results for choosing to send their child to a private school with a voucher.

Parental choices in education mean families have the school they want for their child, and in these new evaluations, test scores actually improved over time. That’s good news on both accounts.

>>> Evidence in Favor of School Choice Continues to Mount

The study conducted on Indiana’s private school choice program shows similar results to that of Louisiana.

For the first few years that a child uses a voucher, researchers found negative effects on student test scores. But the research demonstrates that students remaining in a private school with a voucher after four years catch up to their peers in public school.

These studies join a list of more than a dozen such evaluations that have found mostly positive results for parental choice in education over the past 20 years.

Nevertheless, teacher unions and school board associations continue to fight efforts to give parents and children more learning options around the country.

Some research on private school choice has found neutral or negative results over the years, but such findings are in the minority.

Moreover, we should think long term about social science research. Under some conditions, a policy isn’t going to produce good results right away. Such conditions and the accompanying results can guide future reforms.

For example, in the Louisiana study, children identified as having special needs before changing schools with a voucher were more likely to be de-identified as needing additional services.