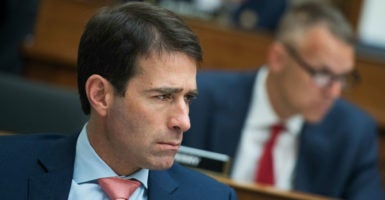 A Louisiana congressman introduced legislation that would strengthen work requirements for recipients of food stamps.

“By putting certain perimeters or requirements on the program where you have to actually do job searches and you have to go do interviews and you have to participate in certain job training activities, it is migrating people from dependence to the workforce and that is a win for everyone,” Rep. Garret Graves, R-La., told The Daily Signal in an interview.

According to a press release from his office, Graves’ legislation:

Graves, whose legislation is titled “Supplemental Nutrition Assistance Program (SNAP) Reform Act of 2017,” said the reform of the food stamp program would help both recipients and taxpayers:

It is a win for the taxpayers that are paying for the program … and it’s a win for those people that previously were unemployed and dependent on government assistance, because it puts them back in the workforce and gives them control over their own destiny and it puts them on a pathway to prosperity.

The legislation would, Graves said, require able-bodied food stamp recipients without dependent children to “do job searches and … provide proof of doing the job searches and the amount of time that they are spending doing this.”

Participation in Alabama’s food stamp program dropped by 85 percent among able-bodied adults without dependents in 13 counties after officials said that those who use food stamps must work, look for work, or get approved job training, The Daily Signal previously reported.

Due to changes implemented in the welfare program in 1996, able-bodied recipients of food stamps between the ages of 18 to 49 with no dependents are limited to three months of food stamp benefits without working in a 36-month period, unless they find employment or are involved in a work program part time.

States could waive the requirement in areas they can show to have job shortages or higher unemployment rates than other areas.

When the American Recovery and Reinvestment Act was passed in 2009 during President Barack Obama’s administration, the legislation permitted that all states could waive the work requirements for food stamp enrollment, as The Daily Signal previously reported.

Included in Jordan’s bill is a provision for state-run work activation programs to assist SNAP recipients in finding jobs.

Graves said instituting work requirements would help curb a program that he says is has grown beyond being a “safety net.”

“While we certainly need to have a safety net … to help provide assistance that are upon hard times and those that have needs, the program … has grown beyond its intention of offering a hand up or a safety net to where it has become a lifestyle in some cases,” Graves told The Daily Signal.

Robert Rector, a senior research fellow at The Heritage Foundation who specializes in poverty and welfare programs, said the legislation “represents excellent policy.”

“Nearly 90 percent of the public agree that able-bodied adults receiving welfare should work or prepare for work in exchange for receiving that aid,” Rector said in a statement provided to The Daily Signal. “The bill would implement this policy for over 4 million able-bodied adults without dependents, saving taxpayers $80 billion over the next decade.”

Those on welfare would not be harmed, Rector added.

This bill does not simply cut people off from welfare. Only those who refuse to work or engage in ‘work activation,’ including supervised job searching, training, and community service, would have their aid terminated.