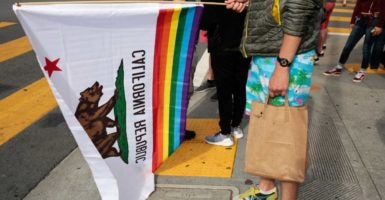 California has now turned its agenda outward by crafting its own “travel ban,” aimed at punishing sister states for not going along with its LGBT ideas. (Photo: John Orvis/Newscom)

Single-party dominance has made California a little crazy.

After a “Calexit” secession effort failed when its leader decided to move back to Russia, the deep-blue state has now turned to other methods to resist the change in political fortunes.

On Friday, the California Assembly narrowly failed to pass a plan to bring single-payer health care to the state, which would have cost more than double the entire current California budget.

But in the age of Trump, the Golden State hasn’t been content to focus on its own issues. It has now turned its agenda outward by crafting its own “travel ban,” aimed at punishing sister states for not going along with its views.

California’s Attorney General Xavier Becerra announced on Friday that the state would no longer fund travel to states deemed “discriminatory” toward LGBT people.

“While the California [Department of Justice] works to protect the rights of all our people, discriminatory laws in any part of our country send all of us several steps back,” Becerra said in a statement.

“That’s why when California said we would not tolerate discrimination against LGBTQ members of our community, we meant it.”

What were the policies California found so odious?

The Tennessee law California targeted as unacceptable was one that said therapists who work with parents don’t have to counsel same-sex couples on how to have a better marriage.

The problematic Texas law was one that allowed adoption agencies to work with parents, but not same-sex parents without penalty.

The other state laws California found unacceptable were in a similar vein.

The ban could have wide-ranging consequences, in particular for college sports.

For instance, college coaches of University of California schools may not be able to receive funding for travel when their teams play in Texas. California’s travel ban has already caused confusion and chaos for college football schedulers.

Among other comments, the message said,

The message mockingly noted appreciation that “California will not be sending its economic development teams to Tennessee to recruit our businesses, but we can still send our teams to recruit their businesses.”

“California might be able to stop their state employees, but they can’t stop all the businesses that are fleeing over taxation and regulation, and relocating to Texas,” Texas Gov. Greg Abbott’s press secretary, John Wittman, said.

California was among the many states that joined a lawsuit against President Donald Trump’s revised travel restriction on six countries labeled “countries of concern” by Congress and the Obama administration.

The list included Sudan, Syria, Iran, Libya, Somalia, and Yemen—all of which have been deemed terrorist hotbeds.

It would be safe to assume that those countries are not in line with the LGBT agenda. Yet, California seemingly finds red states to be more problematic than terror states.

California’s cultural secession is enormously dangerous to the future of the country and is a prime example of the increasing intolerance of modern progressivism.

When the Founding Fathers scrapped the Articles of Confederation and adopted the Constitution, one of the prime reasons for the switch was to create a system of free trade between the states.

This was one of the few expansive powers the Founders placed in the Constitution, and for a very good reason. By doing so, they created the largest and wealthiest free trade zone in the world.

California’s move flirts dangerously with the kind of economic warfare the Founders sought to prevent and will likely be met with punitive actions from other states and constitutional challenges.

Though still a step away from outright secession, California’s message is clear: Join us in the march of history, or we will crush you. And if we don’t get our way, we’ll divorce you.