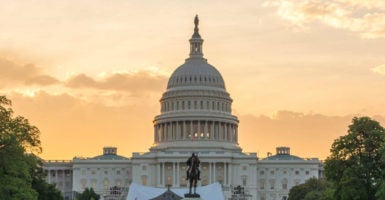 After years of ever-expanding government control and regulation, the economy dropped off a cliff in 2008. (Photo: Dimitrios Manis/Zuma Press/Newscom)

“Drain the swamp!” It was the battle cry of Donald Trump’s presidential campaign.

Many Republican members of Congress echoed that call as well, riding it to victory—and control of both legislative chambers.

The American people rallied around the cry because it reinforced their impression of what Washington had become: a swamp infested with special-interest groups and power-hungry bureaucrats.

They rallied, too, because it held the promise of getting our country back on track—by reforming the tax code, repealing Obamacare, cutting spending, and eliminating the needless red tape that stifles entrepreneurship and innovation.

But more than five months into the new Congress and the new administration, precious little draining has occurred. The delay in action is not only frustrating, it’s expensive: With the promised reforms, the U.S. could have created as much as $5 billion per day in economic output. If nothing changes, the swamp will end up costing more than 2 million prospective jobs over the next decade.

Elites argue that piles of regulations and special rules keep everyone safe. But most Americans understand that these policies serve mainly to enrich special interests and keep upstart entrepreneurs from gaining a foothold.

All the regulation keeps new businesses from offering innovative goods and services at lower prices.

All too often, these regulatory schemes not only fail to protect consumers—they create huge problems, like financial crises and housing busts. And then the elites point to the problems as proof of the need for even further governmental intervention.

The bailouts lead to new programs and federal agencies and, of course, even more rules.

But most Americans don’t want more government. Rather, they want relief from big government so that they can make their own decisions and improve their own communities.

There is plenty of evidence that people thrive more under limited government than under a vastly more intrusive government.

Had the U.S. economy simply stayed on the same trend during the Obama years that it had followed over the previous 25 years, gross domestic product per person would be nearly 10 percent higher than it is now.

Instead, after years of ever-expanding government control and regulation, the economy dropped off a cliff in 2008.

Just getting back on the previous trend would be great, but Americans can do much better. At least three major reforms are now possible that can unleash the power of the American economy.

•Repeal Obamacare: A study by the National Center for Policy Analysis estimates that repealing Obamacare would provide a boost to real GDP of more than 1 percent per year over the next decade.

Based on these projections, personal income would increase by hundreds of billions annually, and the economy would add nearly 1 million jobs by the end of the decade.

A simple division by the number of days suggests that the cost of inaction is nearly $500 million per day in lost output. In terms of jobs, this could translate into as many as 250 lost jobs per day (a relatively small number unless one of those jobs is yours).

• Shrink Regulation: Admittedly, this is a herculean task. The federal government has been burdening people with innovation-killing rules for decades, and it is difficult to estimate the economic effects of a broad deregulation effort.

Two Heritage Foundation scholars have estimated the economic impact of reducing just one of the likely effects of Dodd-Frank: excess borrowing costs.

Their study projects that removing these excess costs would grow the GDP by more than 1 percent per year for the next decade, and boost capital stock by nearly 3 percent per year. Inaction on Dodd-Frank costs another $500 million per day.

• Reform the Tax Code: Estimates of tax reform benefits vary widely because there are so many ways to improve the U.S. tax system, but several plans are currently taking shape.

The Tax Foundation studied the House Republican plan and found that it would increase the long-run size of the economy (in terms of GDP) by more than 9 percent. It also projected that the Rubio-Lee plan would grow the economy by 15 percent over the long run.

Trump’s plan is not fully detailed yet, but a decent guess is that the benefits would be somewhere near these projections.

The increase in jobs, wages, and wealth from growing the economy through these types of tax reforms would be enormous. The cost of waiting on just tax reform can be conservatively estimated as approaching $2 billion per day in lost output.

Repealing Obamacare, rolling back the regulatory state, and implementing pro-growth tax reform would be a big shot in the arm to the U.S. economy. Over the next decade, the cumulative effect of making just those three reforms could boost GDP anywhere from $8 trillion to $18 trillion.

That translates to a cost of between roughly $2 billion and $5 billion for each day that Americans are denied these reforms. In terms of lost jobs, waiting costs nearly 1,000 jobs per day.

Some have said that because any legislative action taken this year wouldn’t take effect until at least Jan. 1, 2018, it doesn’t matter if it happens now or in September. False: The sooner investors and entrepreneurs can see the changes on the horizon, the quicker they can begin taking actions that benefit the economy.

A filled swamp is expensive to maintain. The American people are waiting for Congress to drain it. And they should expect their elected representatives to stay in Washington and make the real changes they were elected to do.