If Congress Is Serious About Tax Reform, It Should Stop Passing Bills Like This 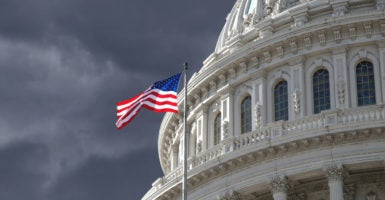 The House of Representatives voted by voice vote to expand and extend an expiring special tax credit for nuclear power. (Photo: iStock Photos)

House Speaker Paul Ryan doubled down earlier this month on getting tax reform done by the end of the year.

He said he hopes to put a tax bill on President Donald Trump’s desk by “deer season”—Nov. 18 for those who aren’t familiar.

But if the recent House vote to extend and expand tax credits for nuclear energy is any indication, Republicans might not be as serious about getting tax reform done this year as they say.

Ryan’s ambitious timeline for reform could be achievable, as the House GOP tax blueprint is a good foundation for updating the tax code.

In his first major speech on tax reform, he rightly called out one of the most important components of reform.

“Real tax reform means slashing our corporate tax rate as low as possible,” Ryan said. “This means eliminating special-interest carve-outs and replacing them with lower tax rates for all businesses.”

This has been the rallying cry of tax reformers for decades. The tax system needs to be simplified by, among other things, eliminating the long list of current tax preferences.

Such reforms can help partially lower the tax rate for all businesses and stop Congress’ destructive habit of using the tax code to pick winners and losers in the private market.

But talking about eliminating special tax preferences is one thing. Actually doing it takes a different level of commitment.

In the same week that Ryan spoke on the virtues of eliminating special-interest carve-outs, the House of Representatives expanded and extended an expiring special tax credit for nuclear power by voice vote.

As the bill now goes to the Senate, it is its turn to feel the pressure from the special interests who will benefit from these subsidies. There is even talk of combining the nuclear credit with a larger package of other green energy subsidies.

Although these tax preferences are relatively small in dollar terms, there are larger costs to the economy, the energy industry, and the broader effort for comprehensive tax reform.

Targeted tax benefits are never good tax policy. Each special deduction, exemption, or credit narrows the tax base, meaning a smaller number of taxpayers have to share the burden of higher taxes.

Instead, businesses are forced to spend their profits lobbying Washington for additional or continued support—money that would have otherwise been spent on expanding or innovating their business, a much more productive activity.

It may be easy to shrug off this one small credit, but the sum of all the special provisions in the tax code—both big and small—accumulate to make true tax reform more difficult than it ought to be.

Whether it is the research and development tax credit, or the state and local tax deduction, the politics of government favoritism are often stronger than those who fight for simple, fair, and low tax rates for everyone.

Last week, the House showed the American people that it may not be committed to true tax reform by voting to extend subsidies for nuclear power.

If Congress is serious about truly updating the tax code and eliminating special-interest carve-outs, it should start acting like it.