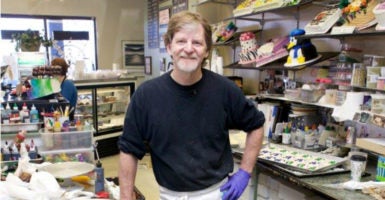 "Shouldn’t we all agree that the government shouldn’t force us to speak or act in a way that violates our deepest convictions?" baker Jack Phillips asks. (Photo: Alliance Defending Freedom)

By deciding to hear the appeal of a Colorado baker, the Supreme Court could make its first ruling next year on whether government may coerce some Christians, Jews, and Muslims to use their creative gifts to celebrate same-sex marriage.

The high court announced Monday that it would review the case of baker Jack Phillips, who cites his Christian faith in declining to make custom cakes for same-sex weddings.

The Supreme Court’s eventual ruling could be the first since its 2015 decision legalizing same-sex marriage to say whether bakers, photographers, florists, and others must be part of such celebrations through their creative expression.

Phillips, whose Masterpiece Cakeshop is in Lakewood, Colorado, stopped making all wedding cakes in 2014 rather than be compelled by the state to design and bake them for same-sex marriages—or be fined for not obeying.

State agency and court decisions said Phillips must make such cakes after a gay couple complained about him in July 2012.

“There’s just certain events, certain cakes I don’t make,” Phillips told The Daily Signal in a phone interview in August 2015. “That was one of them.”

>>> Commentary: Supreme Court to Review Case of a Baker Told He Must Bake Gay Wedding Cake

The Supreme Court previously delayed nine times on deciding to hear Phillips’ appeal in the case, first filed last July. But with the newest justice, Neil Gorsuch, settled into his seat to succeed the late Antonin Scalia, the high court announced Monday morning that it would do so in its next term, which begins in October.

Phillips’ lawyers are asking the justices to rule on whether Colorado’s public accommodations law, by forcing Phillips to express himself in a way that violates his sincere Christian beliefs about marriage, violates the free speech or free exercise of religion clauses of the Constitution’s First Amendment.

Supporters of President Donald Trump’s nomination of Gorsuch to the Supreme Court had cited the judge’s sensitivity to religious liberty in cases that came before him on the Denver-based U.S. Court of Appeals for the 10th Circuit.

On Aug. 13, 2015, the Colorado Court of Appeals agreed with the state Civil Rights Commission that Masterpiece Cakeshop discriminated against two gay men, Charlie Craig and David Mullins, when Phillips declined in July 2012 to take the couple’s order for a cake to celebrate their earlier wedding in Massachusetts.

Another local bakery filled the wedding cake order for the two men.

But the Colorado chapter of the American Civil Liberties Union argued for Craig and Mullins that state law prohibits businesses open to the public from refusing a service based on factors that include race, sex, national origin, and sexual orientation.

Phillips recalled his original encounter with Craig and Mullins in the 2015 interview with The Daily Signal:

I said, ‘You know, I’ll make you a birthday cake, shower cake, I’ll sell you cookies and brownies, I just don’t do cakes for same-sex weddings.’

At which point they stomped out. One went out one door, the other went out the other door, swearing at me and flipping me off.

Phillips, 61, a Christian since the late 1970s, has maintained that creating cakes for same-sex marriages would go against his constitutionally protected belief that marriage is the sacred union of a man and a woman, as taught in the Bible.

Phillips told The Daily Signal in 2015 that he faced a loss of at least $100,000 a year after Colorado judges ruled that his Masterpiece Cakeshop must make wedding cakes for same-sex couples as well as opposite-sex couples.

Masterpiece Cakeshop, which opened in 1993, used to produce about 200 custom-made wedding cakes a year, at about $500 per cake, he said.

“What’s important is that I’m being obedient to Christ,” Phillips told The Daily Signal, adding:

He’s given me this business and if he were here, he wouldn’t make the cake. If he were my employee, I wouldn’t force him to make the cake and participate in it because it doesn’t honor God. The Bible calls it a sin.

Phillips’ lawyers with Alliance Defending Freedom, a Christian legal aid group, describe him as a “cake artist” and argue that the First Amendment means the government can’t compel him to use his talents to express a message supporting gay marriage.

Phillips, who belongs to a church rooted in the Baptist tradition, has opted since March 2014 not to take any new orders for wedding cakes rather than be forced to create them for two men or two women.

“I fear that I will ultimately lose everything and be forced to close if the lower court’s decision is not reversed,” Phillips said in a statement released Monday by his attorneys, adding:

Regardless of your viewpoint about same-sex marriage, shouldn’t we all agree that the government shouldn’t force us to speak or act in a way that violates our deepest convictions?

Laws like the one in Colorado will result in kindhearted Americans being dragged before state commissions and courts and punished by the government for peacefully seeking to live and work consistent with their belief about marriage.

The couple who came into my shop that day five years ago are free to hold their beliefs about marriage; all I ask is that I be allowed the equal opportunity to keep mine.

Phillips’ case is featured in a video produced by Alliance Defending Freedom:

>>> 24 Questions for Jack Phillips, the Baker Who Gave Up Wedding Cakes for God

The Colorado chapter of the American Civil Liberties Union continues to represent Craig and Mullins.

“The law is squarely on Dave and Charlie’s side, because when businesses are open to the public, they’re supposed to be open to everyone,” James Esseks, director of the ACLU’s LGBT Project, said in the chapter’s press release Monday. Esseks added:

While the right to one’s religious beliefs is fundamental, a license to discriminate is not. Same-sex couples like Dave and Charlie deserve to be treated with the same dignity and respect as anyone else, and we’re ready to take that fight all the way to the Supreme Court.

The ACLU quoted Mullins as saying: “This has always been about more than a cake. Businesses should not be allowed to violate the law and discriminate against us because of who we are and who we love.”

The law is on our side and we're ready to take Dave and Charlie's fight to the Supreme Court. #MasterpieceCakeshop https://t.co/4qyrkpw1CZ pic.twitter.com/pIEUuVbdV8

Phillips’ lawyers, who note that Masterpiece Cakeshop makes plenty of other baked goods for customers of all persuasions, see the case differently.

“Jack’s ability to make a living and run his family business shouldn’t be threatened simply because he exercised his artistic freedom,” Jeremy Tedesco, one of Phillips’ attorneys at Alliance Defending Freedom, said in a prepared statement Monday, adding:

Artists speak through their art, and when Jack creates custom wedding cakes, he is promoting and celebrating the couple’s wedding. Jack will gladly allow anyone to purchase any product he sells, but he simply can’t put his artistic talents to use on a custom cake for an event so at odds with his faith convictions.

Tedesco said the American Civil Liberties Union, which went to court to oppose Phillips as well as other creative Christians in Washington and Arizona, “would rather use the strong arm of government to eradicate from the public square people whose views differ from the government’s.”

After the Colorado appeals court ruling against Phillips, his two sisters and a brother-in-law launched an online fundraising effort, “Support Jack Phillips,” to help offset the bakery’s ongoing losses. Its home is Continue to Give, a Christian-oriented “crowdfunding” site.