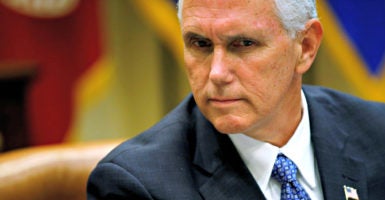 Marjorie Weer spent six months negotiating with an insurance company just to clear the way for her 3-year-old son Montgomery to travel from South Carolina to see doctors at Boston Children’s Hospital.

“This is the real story of Obamacare in America,” @VP says.

Monty, as the family calls him, has spina bifida, a birth defect that prevents the spinal cord from developing properly. Weer says she had to press his case with the insurer from November into April.

During Monty’s short life, the family has had three health insurance plans—under two different companies—largely because of problems caused by Obamacare, Weer says. Those plans offered the Weers few options for insurers in South Carolina and restricted coverage networks outside that state. “Whenever you tell a special needs mom ‘No,’ there is no point to that,” Weer said Monday, as she had the ears of Vice President Mike Pence and Seema Verma, administrator of the Centers for Medicare & Medicaid Services, which oversees Obamacare.

Weer, whose story was first featured by The Daily Signal in February, traveled to Washington to be part of Pence’s listening session with Americans who spoke on behalf of 10 different families who are “victims of Obamacare.”

“You make us jump through hoops; I have the strongest legs in South Carolina,” Weer said in the meeting at the Eisenhower Executive Office Building, adjacent to the White House. She added:

I’ve jumped through hoops every day for three years. So thankfully they did approve the care, after a long time on the phone, for [Monty] to go to the doctor he wanted to. But he is 3. I have a 17-month-old daughter. I don’t want to be on the phone for hours. I want to pick up Play-Doh off the floor. I want to be a mom to my kids.

It’s ironic, Weer said, that the Democrats who passed Obamacare and staunchly support keeping it in place also tout themselves as “pro-woman” and “pro-choice.”

“I’m a woman. My choice is to take my child to a different doctor than Obamacare will let me,” Weer said, with Monty sitting beside her.

After hearing Weer’s story, Pence said to her: “Monty is truly blessed.”

She is the one who is blessed, his mother responded. “This is the real story of Obamacare in America,” Pence said, speaking of all the participants in the listening session.

As Senate Republicans grapple with a health care bill to replace Obamacare, the White House featured the forum for “victims of Obamacare.” Representatives of families talked for more than an hour about skyrocketing premiums, loss of coverage, and a lack of stability when health plans change on an annual basis.

The Congressional Budget Office predicted Monday that 22 million fewer people would have health insurance under the Senate plan than under the Affordable Care Act, popularly known as Obamacare.

However, critics note that too many health insurance plans under Obamacare can’t be used because medical networks are so restricted. And Obamacare mandates that Americans buy insurance even if they don’t want it, or pay a penalty.

Christine McCullough, of Slidell, Louisiana, is among the 6.5 million Americans who chose to pay a penalty and buy their own insurance.

At Pence’s event, McCullough spoke about the outrageous expense of Obamacare plans.

“Move now,” she implored lawmakers. “Don’t wait until this meeting is over. Move now to let us buy insurance plans across state lines.”

Christine Chalkey of Streator, Illinois, talked about her 22-year-old son, Jacob, who has a rare seizure disorder. When Medicaid expanded in Illinois, it led to less coverage for Jacob’s medication, Chalkey said.

“He had tried so many different medicines,” she said.

While on a new medication, he had a major, life-threatening seizure.

“I’m a living miracle,” Jacob said during the forum.

Those around the table applauded him, and he passed written letters about himself to the vice president, including one for President Donald Trump to read.

Pence passed that one along to Kellyanne Conway, counselor to the president, who was at the meeting.

Pence gave a hug to another participant, Connie May of Richmond, Ohio, who talked about what she lost in paying for insurance that too many doctors won’t accept.

“It’s been ringing in our ears: affordable health insurance for everyone. Well, who is everyone?” May said, tearfully.