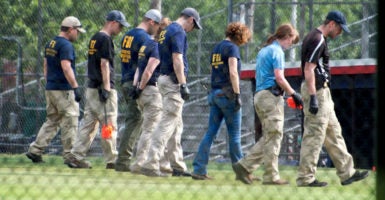 Evidence technicians from the FBI comb through the crime scene for evidence after a gunman opened fire on members of Congress in Alexandria, Virginia on June 14, 2017. The shooter liked the Southern Poverty Law Center on Facebook, which GuideStar recently incorporated the “hate group” language of SPLC. (Photo: Ron Sachs/dpa/picture-alliance/Newscom)

The nation’s leading source of information on U.S. charities announced it will modify its use of a controversial “hate group” designation in listings for some well-known and broadly supported conservative nonprofits.

“We have decided to remove the SPLC annotations from these 46 organizations for the time being,” read a statement posted Friday on GuideStar’s website. “This change will be implemented during the week of June 26, 2017. In the meantime, we will make this information available to any user on request.”

GuideStar, which calls itself a “neutral” aggregator of tax data on charities, recently incorporated the “hate group” labels produced by the left-wing Southern Poverty Law Center, which inspired 41 conservative leaders to protest the move, asking GuideStar in a letter last week to remove the flagging

In an interview with The Daily Signal last week, William G. “Jerry” Boykin, a retired Army general who is executive vice president of the Family Research Council, said GuideStar’s messaging is not neutral.

“GuideStar says that they are neutral, but they are anything but neutral. In fact … I would say at this point, they are becoming an arm of the ultra-left,” Boykin said.

The conservatives’ letter, dated June 21 and directed to GuideStar President and CEO Jacob Harold, who is described on GuideStar’s website as a social change strategist, asked the website to drop the “hate group” labels put on 46 organizations.

Before joining GuideStar, Harold worked for the Hewlett Foundation’s philanthropy program as a “climate change campaigner” for Rainforest Action Network and Greenpeace USA, and as an organizing director at Citizen Works.

Organizations represented on the letter included the Family Research Council, the American Freedom Defense Initiative, the Immigration Reform Law Institute, the American College of Pediatricians, the National Task Force for Therapy Equality, the American Family Association, the London Center for Policy Research, and the Jewish Institute for Global Awareness.

Signers of the letter pointed to recent history and noted the “hate group” designation propagated by the Southern Poverty Law Center and adopted by GuideStar can have serious implications.

Floyd Corkins, the man convicted of a 2012 attempt to massacre employees at the Family Research Council, was inspired by SPLC’s description of the Christian pro-family research organization as a hate group.

In an interview with the FBI, Corkins said a list on the Southern Poverty Law Center’s website motivated his attack, a connection which the SPLC has acknowledged.

The signers also note that that James T. Hodgkinson, the man who police say tried to gun down Republican lawmakers June 14 during practice for a congressional baseball game just outside Washington in Alexandria, Virginia, liked the Southern Poverty Law Center on Facebook.

Among the signers of the June 21 letter was Edwin J. Feulner, founder and president of The Heritage Foundation, the parent organization of The Daily Signal. Two other fixtures of the conservative think tank, Heritage board member Edwin Meese III and Heritage Action for America CEO Michael Needham, also signed the letter. Heritage is not labeled a hate group by either SPLC or GuideStar.

The signers asked Harold “that GuideStar return to its prior, nonpolitical approach to evaluating nonprofit organizations. Please send your reply within one week of receipt of this letter.”

The self-described “neutral” aggregator announced it would continue to navigate the “political spectrum” and evaluate how to move forward.

“We hope to engage in a constructive dialogue with experts from across the political spectrum to help us determine the best way to fulfill this need,” GuideStar’s press release said.