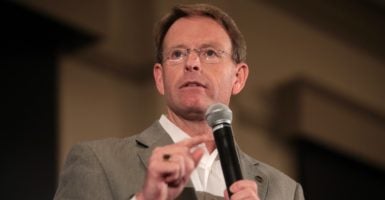 Tony Perkins, president of the Family Research Council, is among multiple pro-life leaders who are concerned with the future of the Senate’s health care bill. (Photo: Gage Skidmore /ZUMA Press/Newscom)

Some national pro-life leaders say they are concerned that the Senate’s health care bill draft, released Thursday, which currently includes pro-life provisions, will ultimately fail to include pro-life protections once the bill is finalized.

“The expectations of the pro-life movement have been very clear: The health care bill must not indefinitely subsidize abortion and must re-direct abortion giant Planned Parenthood’s taxpayer funding to community health centers,” Tony Perkins, president of the Family Research Council, and Marjorie Dannenfelser, president of the Susan B. Anthony List, said in a joint statement.

While the current draft of the legislation would defund Planned Parenthood for a year, a promise made by House Speaker Paul Ryan, R-Wis., and includes a provision that tax credits could not be used to pay for abortions, pro-life leaders are concerned that they will not be included in the final bill.

“The Senate discussion draft includes these pro-life priorities, but we remain very concerned that either of these priorities could be removed from the bill for procedural or political reasons,” the statement reads.

In an interview with The Daily Signal Friday, Perkins reiterated his concerns.

“We came out in support of the bill because of the life protections and the defunding of Planned Parenthood,” Perkins said, adding:

You’ve got 70 members or more on record in the House saying that those pro-life provisions are gone, that the bill’s dead on arrival when it returns back. So, this is critical for the Republicans to deliver on a campaign promise they have been making for a decade.

Sen. Thom Tillis, R-N.C., recently said he thinks the pro-life measures would not fit in the legislation.

“What I heard earlier from the parliamentarian is they didn’t think it would pass,” Tillis said

“I believe that did not pass through the parliamentarian’s review so I don’t expect that,” Collins said.

Senate Republicans are using the tool called budget reconciliation to pass the bill because it requires only 51 votes to clear the Senate, rather than 60 votes to end debate and proceed to a floor vote.

Republicans have a 52-46 majority over Democrats in the Senate.

Some are concerned that the Byrd rule, a Senate rule established in 1985 which prohibits “extraneous matter” in reconciliation packages, could end up disallowing the provision that tax credits not be used to pay for abortions, unless 60 senators voted to waive the rule, The Daily Signal previously reported.

In 2015, the House and Senate passed an Obamacare repeal bill with a pro-life component using the budget reconciliation process. It “cleared all the procedural loopholes in the Senate,” according to Rachel Bovard, a former director of policy services at The Heritage Foundation.

President Barack Obama vetoed it, however, in January 2016.

“The defunding of Planned Parenthood [was] obviously in the last reconciliation bill in 2015 that passed the Senate so there is no justification for those especially who supported it the last time not to support it this time,” Perkins said.

The March for Life also voiced concern about what may become of the Senate’s health care draft.

While we appreciate the inclusion of language to redirect federal funds away from abortion groups like Planned Parenthood, the reality is that necessary pro-life protections in this bill will be stripped by the Senate Parliamentarian, as we have now publicly heard from two Senators. If this happens, one of the most egregious aspects of Obamacare—tax credits for plans covering abortion—will continue under this Administration and Congress. Abortion is not health care.