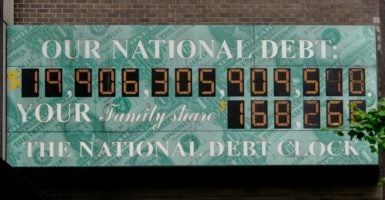 Only 2 in 10 voters say they believe Congress should raise the debt ceiling. (Photo: Albin Lohr-Jones/Polaris /Newscom)

A large number of Americans across the political spectrum have come to an agreement on one thing: Congress should not raise the debt ceiling.

According to the Morning Consult, a joint poll between the Morning Consult and Politico was taken between June 15 and 19, asking, “Do you believe that Congress should or should not raise the debt ceiling, the amount of money the U.S. government can legally borrow?”

Results of the poll indicate that a majority of Americans do not want the debt ceiling to be raised.

However, the Department of the Treasury states that not raising the debt ceiling would lead the government to defaulting on its legal obligations, causing “catastrophic economic consequences” that would “precipitate another financial crisis and threaten the jobs and savings of everyday Americans.”

Only 2 in 10 voters say they believe Congress should raise the debt ceiling, according to the poll, with only 20 percent of Republicans and 25 percent of Democrats in support.

For paid government workers and those who receive their salaries from the Treasury, the results were similar. Thirty-one percent said they support raising the debt ceiling, while 54 percent oppose.

According to Romina Boccia, a leading fiscal and economic expert at The Heritage Foundation:

Nearing $20 trillion and already in excess of the economic product created in the U.S. this year, the only responsible choice in dealing with our national debt at the debt limit is to pursue spending controls before raising the debt ceiling again.

“It is both morally and economically wrong to continue burdening younger generations with overspending and overborrowing without controls. Congress should put the budget on a path to balance and enshrine this path with a firm spending limit that cuts spending automatically when Congress fails to act,” Boccia continued. “The current path of automatic spending increases is detrimental to America’s fiscal and economic future.”

The Morning Consult poll was a national survey of 2,051 Americans with a margin of error of plus or minus 2 percentage points.

This article has been updated to include the correct percentage of Democrat and Republican voters who oppose raising the debt ceiling.