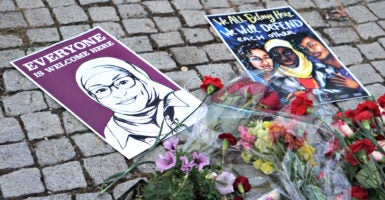 An image of Nabra Hassanen, a Muslim teen slain in suburban Virginia, is part of a vigil June 20 at Dupont Circle in Washington, D.C. (Photo: Russ R. Scott/newzulu/Newscom)

An illegal immigrant beat a 17-year-old girl with a metal baseball bat before dawn on Father’s Day and dumped her body in a pond in a suburb of Washington, police say.

Authorities said a man they identified as Darwin Martinez Torres, 22, attacked and abducted Nabra Hassanen after getting into an argument with a group of about 15 young Muslims on their way to a nearby mosque in Sterling, Virginia.

Immigration and Customs Enforcement officials confirmed to The Daily Caller and other news outlets that Torres is an illegal immigrant from El Salvador who was living in Sterling. Family and friends mourned Nabra at a funeral service Wednesday before her burial.

“There is nothing like losing a child, especially in the way that we lost Nabra,” Imam Mohamed Magid of the All Dulles Area Muslim Society mosque told mourners, the Associated Press reported.

A patrol officer arrested Torres later Sunday morning after seeing him driving erratically, according to news reports. He was charged with second-degree murder after police found Nabra’s body in a pond about 3 p.m.

Hans von Spakovsky, a senior legal fellow at The Heritage Foundation, told The Daily Signal that the killing should highlight the dangerous nature of sanctuary cities, which don’t cooperate in enforcing immigration law, as well as inconsistent immigration policies under the Obama administration:

This is just more evidence of how many American families are being victimized by criminal illegal aliens—this crime would not have happened if this murderer had been stopped when he broke into the country, or if he had been picked up and deported by [Immigration and Customs Enforcement]. Yet these are the types of aliens that sanctuary cities want to protect.

Nabra lived with her family in Reston, in Fairfax County, a sanctuary county; Sterling is in Loudoun County, which is not.

Police described the original encounter as a road rage incident in which Torres confronted Nabra and other teens of both sexes around 3:40 a.m. Sunday as they returned on foot and bicycle to the All Dulles Area Muslim Society mosque. The mosque had hosted an overnight Ramadan event.

Nabra and the other girls were wearing Muslim headscarves and robes, a Hassanen family spokesman told AP.

Police said they had found no evidence that the killing was a hate crime committed out of animosity toward Nabra’s Muslim faith. But her parents and many on social media say they are not convinced.

On the day of her funeral, #NabraHassanen's memorial was set on fire. Is it a hate crime yet? pic.twitter.com/fonzYQnTnH

ICE said in a formal statement that it had put a detainer on Torres, “a citizen and national of El Salvador,” because he is an illegal immigrant held on local criminal charges that make him “removable from the United States.”

In a speech Wednesday night in Cedar Rapids, Iowa, President Donald Trump once again raised the issue of violent crimes committed by illegal immigrants. Trump referred to a different case—that of Sarah Root, 21, who was killed in January 2016 when an illegal immigrant from Honduras who police said was drunk and street racing rammed his pickup truck into her SUV at a traffic light in Omaha, Nebraska.

Thousands of beautiful American lives like Sarah’s have been stolen for the simple reason that our government has refused to enforce already existing laws. The media, these people like to talk about separating families. But the families they never talk about are the American families separated forever from the ones they love because we don’t protect our borders and uphold the immigration laws of the United States.

The Trump administration created a new office in the Department of Homeland Security earlier this year to assist those who have been affected by crimes committed by illegal immigrants.

“The office is called VOICE—Victims of Immigration Crime Engagement. We are providing a voice to those who have been ignored by our media, and silenced by special interests,” Trump said in an address to a joint session of Congress.

El Salvador, where Torres is from, saw 81 homicides per 100,000 residents last year, The Guardian reported, making it one of the “deadliest” countries.

El Salvador is a hub for MS-13, a gang started in Los Angeles by Salvadorans. Trump has vowed to target the gang’s presence in the U.S., and did so again Wednesday night.

“We can devastate this gang. We’re going after them. We are not going to allow them to take over a block, a corner of our communities, and terrorize people with this violence,” Attorney General Jeff Sessions said in April.

Torres was formally charged Monday and was being held without bond in a Fairfax County detention center.