Opposite Sides of Cultural War Meet to Debate Religious Liberty and Discrimination: Here Is What They Said 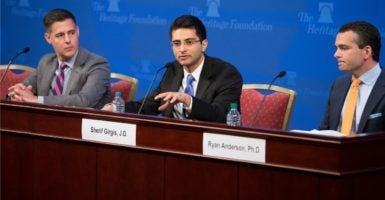 Amid the ongoing national debate about religious liberty and discrimination, two conservatives and a liberal wrote a book to present their views and discuss where Americans go from here.

At an event last week at The Heritage Foundation, the three co-authors—Ryan T. Anderson, John Corvino, and Sherif Girgis—sat down to discuss their book, “Debating Religious Liberty and Discrimination,” and answer questions from the audience.

Corvino, chairman of the philosophy department at Wayne State University in Detroit, Michigan, has written widely in support of same-sex marriage. He is the co-author with conservative Maggie Gallagher of the book “Debating Same-Sex Marriage.”

Corvino, who is gay and an LGBT activist, began by presenting his concern that exemptions from anti-discrimination laws granted to those who argue a First Amendment right amount to “religious privilege.”

“The worry,” he said, “is that religious liberty is morphing to a kind of religious privilege for certain groups, and perpetuating a type of discrimination.”

He argued that the courts have been inconsistent in which cases they grant exemptions to religious persons, and appear to show more sympathy for evangelical Christians than for members of other minority religions or other conscience claims.

In contrast, Girgis, a doctoral candidate in philosophy at Princeton University and also co-author with Anderson of  “What Is Marriage? Man and Woman: A Defense,” spoke to the importance of religious liberty as a social good. He said it is a vital component of a free and civil society for two reasons.

First, “moral and religious integrity matter in themselves,” Girgis said, because when a person is “free to pursue the ultimate questions about human life … and you are able to live with those convictions, you’re better off, even if those convictions are wrong.”

Anderson, the William E. Simon senior research fellow at The Heritage Foundation and author of the book “Truth Overruled: The Future of Marriage and Religious Freedom,” talked about the role of government.

Anderson said “it is the role of the government to protect the ability of citizens to flourish, to promote the common good,” and that “religion is part of the common good.”

Government should protect “the space for citizens to seek out their religious good as they understand it,” Anderson said.

And no matter how secular or religious one may be, he said, no one wants someone else, much less the state, telling them how to live their religious—or nonreligious—lives.

The exemptions that concern Corvino are about finding a compromise between the liberty of one American and the liberty of another, Anderson said. They are not meant to determine which liberty is more important than another.

The three authors agreed that religious liberty is vital to America and to civil society.

The United States has a “great legacy of religious liberty,” Corvino said, that “at its best has been a legacy of inclusion, not discrimination.”

Watch a video of the entire event here.