How Dissidents Are Responding to Trump’s Change in Cuba Policy 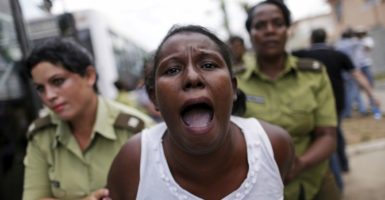 Hours before President Obama arrived for a visit in Havana in 2016, s member of the Ladies in White dissident group shouted as she was led away by police officers after they broke up a regular march of the group, detaining about 50 people. (Photo: Ueslei Marcelino/Reuters/Newscom)

The letter sent by Cuba’s main dissident group to President Donald Trump thanking him for his decision to prohibit U.S. trade with the military, security and intelligence services on the island—their tormentors—serves as a timely rebuke of President Barack Obama’s warm embrace of the Castro regime and those still defending it.

The letter was sent by Berta Soler on behalf of the group she leads, The Ladies in White. These brave, mostly Afro-Cuban women suffer constant harassment, beatings, and incarcerations at the hand of the Castro regime when they attempt to march on the streets of Havana on Sundays.

“These days, Mr. President, when most of the world responds with a deafening silence to the harassment, arbitrary detentions, beatings, house searches, and robberies against peaceful opponents, human rights activists and defenseless women, your words of encouragement are most welcomed,” Soler wrote.

“We will continue to fight for our rights because we recognize it is our duty to free ourselves, but we can’t do it alone. It is also the duty of the freedom loving peoples of the world. The United States must continue to be the first defender of those who lack rights and freedoms in the world,” she added.

Sent Saturday, one day after Trump unveiled in Miami his new restrictions, the letter crystalizes what is at stake. One can believe these women’s intimate understanding of the vicious nature of the Cuban regime, or those who have come out in support of Obama’s policy, who minimize the brutality and economic devastation unleashed upon Cuba by the communist regime.

Perhaps the most acidic critic of the Trump doctrine has been the architect of Obama’s policy, his former deputy Ben Rhodes. In op-eds and tweets since last week, Rhodes has zigzagged between insisting that Trump’s changes won’t matter and warning that they will have a chilling effect on trade.

He has been joined by a cadre of progressive journalists, especially at NPR and MSNBC, whose leading defender of relations with Raul Castro’s Cuba, Andrea Mitchell, reported her show from Havana last week.

Trump was unstinting in his attacks on the Castros’s nearly six decade uninterrupted military dictatorship of Cuba.

“For nearly six decades, the Cuban people have suffered under communist domination. To this day, Cuba is ruled by the same people who killed tens of thousands of their own citizens, who sought to spread their repressive and failed ideology throughout our hemisphere, and who once tried to host enemy nuclear weapons 90 miles from our shores,” said Trump in Miami.

“The Castro regime has shipped arms to North Korea and fueled chaos in Venezuela. While imprisoning innocents, it has harbored cop-killers, hijackers, and terrorists. It has supported human trafficking, forced labor, and exploitation all around the globe. This is the simple truth of the Castro regime,” he added.

“My administration will not hide from it, excuse it, or glamorize it. And we will never, ever be blind to it. We know what’s going on and we remember what happened,” said the president, in a clear reference to his predecessor.

Obama not only unilaterally ended many restrictions on trade and travel with Cuba after he announced on Dec. 17, 2014 that he would undo the adversarial approach toward Castro of his 10 predecessors, Obama went out of his way to extend his hand to those who pummel people like Soler.

He traveled to Havana last May with his entire family, went to a baseball game with the dictator Raul Castro, and even did the wave with him while in the stands. At no time did he make his warmth contingent on Castro promising to ease up on dissidents.

And indeed, human rights groups report that political beatings and arrests (nearly 10,000 in 2016 alone) have increased.

The arguments made by Rhodes, Mitchell et al basically boil down to “sure, Mr. Castro ain’t no Thomas Jefferson, but there are worse people.”

In an op-ed in The Atlantic on Friday, Rhodes laid much of the blame for Cuba’s ruined economy on the U.S. embargo of the past six decades, rather than on the fact that communism has been a failed system everywhere it has been tried.

“Yes, the Cuban government shoulders its share of the blame,” Rhodes allows in passing. “But there are dozens of authoritarian governments; we do not impose embargoes on China or Vietnam, Kazakhstan or Egypt.” He refers to the dissidents once in his piece, damning them by calling them “the dissidents that the United States supports.”

Mitchell made similar comments last week, suggesting at one point that though Castro may not hold elections, world leaders like Turkey’s Recep Tayyip Erdogan and the Philippines’ Rodrigo Duterte are worse.

These comments and others make clear why Castro gets a pass. Erdogan and Duterte represent threats to democracy in their countries, but both were democratically elected, whether we like it or not, and lead nations that are treaty allies, which makes things tricky.

The Castro brothers have not had elections since they took over in 1959 and lead a virulently anti-American regime, which as Trump said, continue to destabilize our region.

One can only decry that the Obama opening to the Castros has been reversed if one is blind to the brutality of the Castro government and the threat it represents to American interests and Cuban lives.