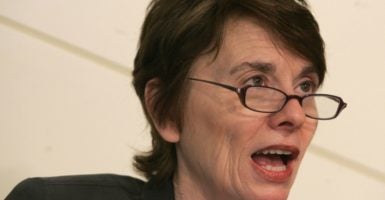 “The cold biological truth is that sex changes are impossible. Every single cell of the human body remains coded with one’s birth gender for life,” she told The Weekly Standard in an interview published June 15.

The author of “Sexual Personae”, Paglia identifies herself as “a registered Democrat who voted for Bernie Sanders in the 2016 primary and for Jill Stein in the general election.”

“It is certainly ironic how liberals who posture as defenders of science when it comes to global warming (a sentimental myth unsupported by evidence) flee all reference to biology when it comes to gender,” said Paglia.

Ryan Anderson, a senior research fellow at The Heritage Foundation, agrees about the importance of biology to the discussion.

“The best biology, psychology, and philosophy all support an understanding of sex as a bodily reality, and of gender as a social manifestation of bodily sex. Biology isn’t bigotry, and we need a sober and honest assessment of the human costs of getting human nature wrong,” said Anderson, author of the forthcoming book on transgenderism, “When Harry Became Sally.”

In a democracy, everyone, no matter how nonconformist or eccentric, should be free from harassment and abuse. But at the same time, no one deserves special rights, protections, or privileges on the basis of their eccentricity. The categories ‘trans-man’ and ‘trans-woman’ are highly accurate and deserving of respect. But like Germaine Greer and Sheila Jeffreys, I reject state-sponsored coercion to call someone a ’woman’ or a ‘man’ simply on the basis of his or her subjective feeling about it. We may well take the path of good will and defer to courtesy on such occasions, but it is our choice alone.

Paglia, the daughter of Italian immigrants, is a professor at The University of Arts in Philadelphia, Pennsylvania. She has authored several cultural critique books such as “Sexual Personae” and “Free Men, Free Women”.