These 2 Solar Companies Want Special Treatment. Here’s Why That Would Harm Green Technologies. 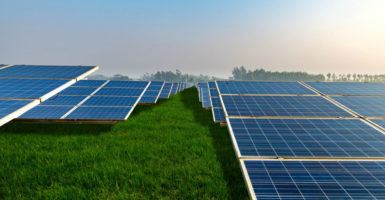 In recent weeks, two U.S. manufacturers of solar energy components—Suniva and SolarWorld—have petitioned the U.S. International Trade Commission to impose tariffs on the imports of various products used in the production of solar panels.

Such an initiative has been rightly condemned by the solar industry itself. Such a tariff would benefit Suniva and SolarWorld for a time, but would hurt most others, including assemblers and installers of solar arrays and customers wanting solar energy for their homes and businesses.

Tariffs like what Suniva and SolarWorld are requesting would severely restrict everyday Americans from purchasing more competitive technology at a lower price from abroad.

Some have complained that President Donald Trump’s decision to exit the Paris climate agreement is abandoning the future of energy, which they argue is in renewable energy technology.

That’s a dubious argument to be sure, but raising tariffs on solar panel manufacturing components surely is a policy that would lessen the competitiveness of the U.S. solar industry writ large.

It would threaten any leadership that American companies have achieved in the global renewable energy market and force significant cost increases on consumers.

Meanwhile, tariffs could, at best, only artificially stabilize the domestic solar panel manufacturing industry for a time.

The remedy to current woes is the free market, not tariffs. The free market can readily respond to technologies of merit as investors and consumers build and acquire the necessary capital to invest.

If a technology is failing, the investors—namely, those with skin in the game—rather than politicians can decide if it is worth saving, or if it has passed its possibility of benefit. This will allow for the optimal solution in the long run.

The solar industry has trumpeted falling prices that it claims are competitive with other traditional energy resources. This alone should rule out protectionist policies. If prices are truly competitive, the market will let these technologies succeed and thrive.

It may be, however, that Suniva and SolarWorld cannot survive competition. Suniva has already filed for bankruptcy, and SolarWorld’s parent company in Germany has done likewise. But that should be understood as a market correction rather than a catastrophe.

The Model T and PC were not produced by a regulator’s pen, and neither will advances in green technology. The greatest achievements in industry grow through the natural responsiveness of our capitalist economy to problems and needs in the marketplace.

If politicians would let companies in the energy sector thrive or fail based on the merits of their products and services instead of by artificial influence, the same technological breakthroughs that allowed companies like Apple and Amazon to excel could likewise occur in the energy and environmental sectors.