Coach Kennedy, Who Lost His Job After Praying, Makes His Case to 9th Circuit Court 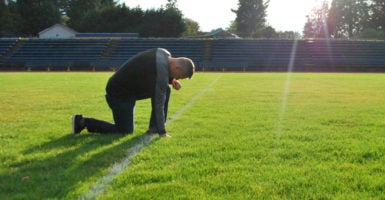 “My hope is that, at the end of the day, the court will let me get back to the sidelines and back with my team,” football coach Joe Kennedy says. (Photo: First Liberty Institute)

Coach Joe Kennedy took his fight to be allowed to pray silently on the football field to court this week, appealing to a bench with a liberal reputation.

“My hope is that, at the end of the day, the court will let me get back to the sidelines and back with my team,” Kennedy said in a statement after his appearance in the 9th Circuit Court of Appeals.

In late October 2015, Kennedy lost his job with the Bremerton High School football program in Bremerton, Washington, after administrators repeatedly told the Marine veteran to stop praying on the 50-yard line.

Kennedy’s lawyers argued Monday before a three-judge panel of the 9th Circuit in Seattle, Washington, asking the judges to overturn a U.S. District Court ruling against him, also in Tacoma.

His lawyers want the appeals court to order the Bremerton School District to stop discriminating against Kennedy based on his “brief, private religious expression” and reinstate him, the Kitsap Sun reported.

The superintendent of the Bremerton School District first told Kennedy in September 2015 that he must stop praying because the public display of religion by a public school employee could be misconstrued as the district’s endorsement of religion.

The school district said it based its decision on the Supreme Court’s 2000 ruling in Santa Fe Independent School District v. Doe.

Kennedy, 48, is not seeking monetary damages, saying he wants to be back on the sidelines, coaching his players, while maintaining his First Amendment rights.

In response to questions from the three judges on where the line is between private and public prayer, one of Kennedy’s lawyers, Rebekah Ricketts, said the coach never coerced students to participate in his 15- to 30-second prayer on or off the field.

The school district’s attorney, Michael Tierney, argued that teachers and coaches do have influence over students, whether subtle or not. So, Tierney said, teachers and coaches must refrain from religious expression that could be perceived as coercive, or risk violating the Establishment Clause, the Kitsap Sun reported.

The judges questioned why the school district didn’t take action earlier, since this had been Kennedy’s ongoing practice since 2008, shortly after he was hired.

Tierney said district officials had thought Kennedy was making an inspirational speech to the crowd gathered around him on the field.

The 9th Circuit has a disputed reputation as one of the most liberal courts in the nation.

If the appeals court allows the lower court’s ruling to stand it essentially will be “affirming the school district’s discrimination” and affecting “millions of Americans, especially teachers,” Jeremy Dys, senior counsel at First Liberty Institute, which represents Kennedy, said after the oral arguments.

“This is an overwhelming burden on the free exercise of religion by a free people in the United States that ought to be rejected,” he said.

“I just want the ability to go back out there and help these young men, and also have my constitutional rights that I fought for in the Marine Corps for 20 years,” Kennedy said in a telephone interview last year with The Daily Signal. “That’s it—it’s pretty simple.”

In a video created by First Liberty Institute, Kennedy hints at his own rough childhood, and says he believes that “all the hard times I had in my life were really setting the stage for exactly this battle that I’m at right now.”

He adds: “And that’s why I really love coaching, it’s because I understand what those kids are going through.”

Ryan T. Anderson, a senior fellow at The Heritage Foundation who studies religious liberty, told The Daily Signal in an email:

Americans do not give up their right to the free exercise of religion simply because they work for the government. Religious Americans need not become secularists anymore than secularists need to become religious in order to lend their services to our government.

Upon taking his position at Bremerton High, Kennedy previously told The Daily Signal, he made a promise to God to pray after each game for his players, for the opportunity to play, win or lose, and for his ability to coach. He did just that until 2015.

That October, First Liberty Institute sent what is called a demand letter to the school district, seeking a religious accommodation for Kennedy. When the district refused, the group filed a complaint with the Equal Employment Opportunity Commission, which issued a “right to sue” letter in December 2015.

Following the District Court ruling against Kennedy, two professional football stars filed a friend-of-the-court brief on his behalf to be included in the arguments before the 9th Circuit.

One was Steve Largent, a former congressman from the state of Oklahoma and Pro Football Hall of Fame member who played for the Seattle Seahawks, the other Chad Hennings, a former Air Force pilot and defensive tackle for the Dallas Cowboys.

Editor’s note: Christine Roe, who reported this story, previously was an intern at First Liberty Institute.