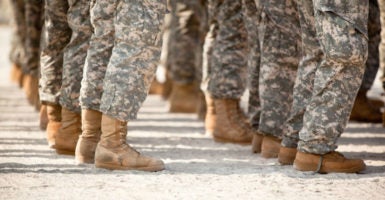 When asked, he told the assembled senators that in his opinion, the Army does not have enough soldiers to accomplish the missions it has been assigned.

Acknowledging that Secretary of Defense James Mattis is currently conducting a defense strategy review, Milley gave his assessment that to accomplish the Army’s portion of the defense strategy, the active component size of the Army should be between 540,000 and 550,000, the National Guard between 350,000 and 355,000, and the Army Reserve between 205,000 and 209,000.

In the active component, after enduring four years of debilitating Obama-era force reductions, the active Army now stands at 476,000, the National Guard at 343,000, and the Army Reserve at 199,000.

To regrow the Army to the level recommended by Milley in the active component alone will require an addition of a minimum of 64,000 soldiers, which will be costly, difficult, but in his judgment, necessary.

In making his assessment, Milley and acting Secretary of the Army Robert Speer reminded the committee that the U.S. faces a much more dangerous international situation than it did five years ago.

They highlighted the growing capabilities of Russia, characterizing it as “formidable;” an “increasingly dangerous” North Korea; China’s “assertive actions;” and a host of challenges in the Middle East ranging from Iran’s missile threat to the terrorist threat from the Islamic State and its ilk.

Milley’s recommendation on Army force structure generally aligns with statements made by President Donald Trump, who has pledged to regrow the Army back to 540,000.

But to the surprise of many, Trump’s 2018 defense budget request unveiled last month did not include a request for any additional soldiers for the Army. Instead, it seeks to maintain the levels authorized in 2017.

Administration representatives endeavored to explain that the rebuilding of the military’s size and equipment will await the completion of Mattis’ strategy review that is now underway, but which is not expected before the fall of 2017.

The Army’s list of unfunded priorities, submitted at the end of May to meet a new requirement in the 2017 National Defense Authorization Act, does however include a requirement to increase the strength of the Army, with a request for 10,000 active, 4,000 National Guard, and 3,000 in the Army Reserve.

The Congress acted correctly and courageously in 2017 to begin to regrow the Army by adding 17,000 active-duty soldiers to President Barack Obama’s proposed request for 460,000. There is near consensus that the last four years of strength cuts have reduced the Army’s ability to execute its missions and significantly raised strategic risk to the country.

Now faced with a similar situation for fiscal year 2018, Congress should act again to incrementally increase the size of the Army and authorize the prudent growth requested in the Army’s unfunded requirements list.

Mattis’ strategy review is a necessary assessment, but there is no danger of “over-growing” the Army. The addition of the requested 10,000 soldiers on the Army’s list would bring them to 486,000, still well below what the chief of staff of the Army believes is needed.

The Army today is too small. Milley and Speer related that today soldiers and units are being deployed at a grueling and relentless pace, stressing service members and their families.

Congress should not allow a “pause” in the rebuilding of the Army. It should instead continue to reverse Obama’s ill-advised cuts to the Army.