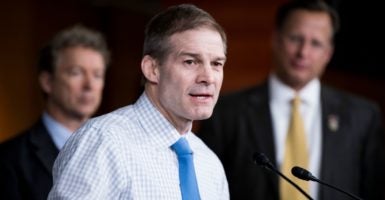 The House Freedom Caucus wants to “go big” on a tax reform package to include welfare reforms, but likely wouldn’t include a tax on imports, or a border adjustment tax.

“There is not consensus for the border adjustment tax,” Rep. Mark Meadows, R-N.C., said Friday during a panel of four House Freedom Caucus members at The Heritage Foundation. “The sooner we acknowledge that and get on with a plan that actually works and actually can build consensus, the better off we will be.”

Meadows said the House Freedom Caucus could support much of the Brady plan, and believes Congress should move forward on common principles to pass a major package. But, he added, a corporate tax cut should help smaller businesses.

Rep. Warren Davidson, R-Ohio, said of tax reform, “We need to not tweak around the edges, we need to go big.” Davidson also said he could back the import tax, but thinks it’s a complicated sell.

“I’m the one guy up here that can live with a border adjustable tax,” Davidson said, but added, “How do you pull it off? I think it’s lost a lot of momentum.”

“Two principles should guide our tax policy. One, let families keep more of their money. Two, design a code that is conducive to producing economic growth,” Jordan said. “What is not conducive to those principles is a whole new tax on the American economy, the BAT.”

Brady has argued the tax would “restores America as the best place on the planet to do business.”

Rep. Dave Brat, R-Va., noted strong supply-side policies will create economic growth, which is the only way the country can dig out of a fiscal hole.

“You’ve got $20 trillion in debt and then $100 trillion in unfunded liabilities for … young people,” Brat said. “Medicare and Social Security are insolvent in 2034. And [the Congressional Budget Office] … [said] in about 15 or 20 years, all federal revenues will go only to mandatory and entitlement programs—all federal revenues. So, that means there is nothing left for the military, education, transportation, etc. … ”

Jordan proposed a welfare reform bill for able-bodied Americans. He said House Freedom Caucus members might be willing to live with a higher budget number if Congress will agree to real welfare reform. He noted the conversation with his employer constituents.

“‘Hey Jordan, in spite of all the stupid things going on in Washington the last eight years, we are still creating jobs. We can’t find people to work,’” Jordan said, paraphrasing the conversations. “So this is where welfare reform is just good public policy. But I don’t think you achieve sustained growth if you don’t have a labor force to get you to the productivity number.”

Davidson also proposed a bill for a commission to consolidate the number of welfare programs, similar to the base realignment commission for the U.S. Defense Department. He said some Democrats could support the goal, since the 92 federal welfare programs are often duplicative.

“Some are more effective than others at promoting healthy families and some are more effective than others at actual education attainment that leads to employment,” Davidson said. “So you create a commission, sort of like the base realignment commission that’s called Welfare BRAC, four Republicans, four Democrats, they pick their own chair, they get a year to work … We could be talking about a reform that would take us from 92 means-tested programs, I don’t know if we can get to 12, but maybe we can get to 40 or 50 programs.”