Why the US Must Stay the Course in Afghanistan 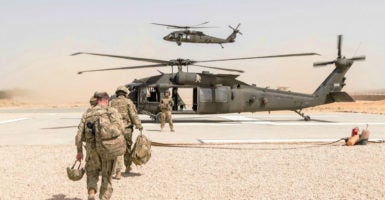 U.S. troops have held a steady presence in Afghanistan since 2001, when the Taliban was pushed out of power following 9/11. (Photo: Brian Harris/Zuma Press/Newscom)

The desire to “bring the boys home” after war’s end is deeply engrained in the American psyche.

Americans tend to get impatient with long-lasting military commitments overseas and like to see an end in sight. It is an understandable and noble impulse, and reflects the deep connection many Americans feel with family, friends, and neighbors serving in the military.

History has shown, however, that peace and stability often depends on America being willing to accept a presence on foreign soil, and to be committed there for decades into the future after wars have been won.

U.S. military bases in Europe are a case in point. So are the U.S. troops stationed in South Korea and Japan.

These bases have been part of a 70-year commitment, begun directly after World War II. This commitment has kept the peace and formed the foundation for an unprecedented period of global prosperity.

Next week, the Pentagon is due to present President Donald Trump with its plan for future deployments in Afghanistan. The terrorist attack that killed 90 and wounded more than 400 people in Kabul on May 31 was a sobering reminder of the country’s fragile security situation.

The United States and its NATO allies currently have 12,500 troops stationed in the country, of which 8,500 are Americans. They are there to help train and shore up the Afghan military.

It is expected the Pentagon will recommend reinforcing the NATO mission with a deployment of an additional 5,000 to keep the Taliban from resurging. There is no doubt that it is in our interest—and the interest of the Afghan people—to remain in Afghanistan for the foreseeable future.

As noted by the Heritage Foundation’s Luke Coffey, we have in fact made considerable progress in defanging the Taliban. Coffey writes:

Today, according to the special inspector general for Afghanistan reconstruction’s most recent quarterly report to Congress, the Taliban has ‘control or influence’ in only 11 out of 407 districts across Afghanistan, equaling only 9 percent of the country’s population.

This is a far cry from the days when it harbored al-Qaeda, the terrorist group that launched the most lethal attack ever against the United States on Sept. 11, 2001.

Additionally, we have the painful, recent example of what happened in Iraq when President Barack Obama pulled U.S. troops out in 2011 to fulfill his campaign promise.

The Iraqi military on its own was in no way ready to contain the advance of ISIS out of Syria, the “JV team” as Obama dismissively called the terrorist group.

Let us remain steadfast in Afghanistan. It is in the interest of all that the United States remain committed to denying the Taliban, al-Qaeda, and ISIS another safe haven in that country.