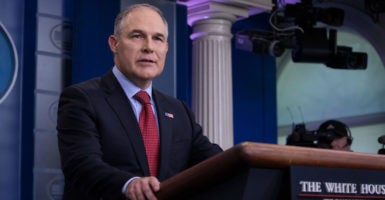 In an interview with Breitbart’s Joel Pollak on Monday, Pruitt said he supported a “red team-blue team” set up to test climate science. Pruitt was inspired by an op-ed by theoretical physicist Steven Koonin, but others have been pushing this idea as well.

“If truth is what we are all after, why would any scientific organization object to an independent look at the claims of the climate establishment?” climate scientist John Christy said.

Christy has testified on the value of “red teams” for climate science many times in the past decade. This time, however, environmentalists and “consensus” scientists are worried Congress will take him seriously.

Red teams would challenge blue teams on global warming hypotheses on “what do we know, what don’t we know, and what risk does it pose to health, the United States, and the world,” Pruitt told Breitbart.

The military commonly using this method to challenge strategies and improve their overall effectiveness. Many climate scientists, however, say it has no place in their field. After all, 97 percent of climate scientists supposedly believe humans are the main cause of global warming.

“This just feels to me … like another way to skirt the tried and true scientific process that has worked for years in our field and many others,” said Marshall Shepherd, an atmospheric science professor at the University of Georgia who called the idea a “gimmick.”

Consensus scientists say the red team setup could manipulate public understanding of the science, giving a false impression of uncertainty and delay action on global warming. Skeptics, like Christy, say the other side is afraid the method will expose the weakness of the supposed “consensus” on global warming.

“My own analysis concerning 102 climate model runs is as clear as it can be—the theory has failed the simplest of scientific tests,” Christy said. “None of the august scientific societies crunched through the huge volumes of model output and observational data to perform such tests.”

“In the normative scientific method, when our theory fails, we are supposed to go back and modify or reject the theory and test again,” Christy said. “In this modern way of doing science, as best I can tell, the proponents of a failed theory simply yell louder, schedule marches on Washington, and attempt to quash any dissent.”

Climate scientist Roger Pielke Sr. says peer review has become politicized, where  “gatekeeping” plays a role in who gets published and who doesn’t. Skeptics usually get the wrong end of that deal.

Pruitt can only do so much to change how the EPA conducts research, and it’s uncertain how much traction this idea will gain in Congress, especially with other major issues, like the Russia investigation and Obamacare repeal, sucking up political capital.

“I can understand why political organizations would object—because their deeply held beliefs may be shown to be in error and thus set a foundation to undo their attempts to set rules for the ‘hoi polloi,’” Christy said.

“Claiming that the truth has already been determined regarding ‘climate change,’ and thus red teams are not needed, is an argument made by someone who has not examined the theory,” he said.