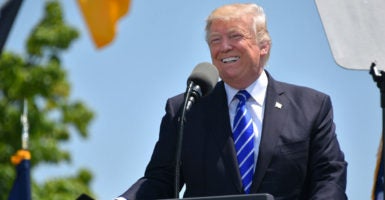 President Donald Trump submitted a new slate of judicial nominees to the Senate Wednesday, naming nine appointees to federal courts across the country.

The list is the second such slate that the president has submitted to the Senate. The White House also indicated that Trump will officially nominate three more judicial candidates in the coming days.

The nominations are the latest in what are expected to be monthly waves of nominations.

The most high-profile nominations include Justice Allison Eid for the 10th U.S. Circuit Court of Appeals, Judge Ralph Erickson for the 8th Circuit, and Stephanos Bibas, a professor at the University of Pennsylvania Law School, who will be nominated to a seat on the 3rd Circuit in the near future.

Eid appeared on the president’s list of potential Supreme Court nominees during the 2016 presidential campaign.

“Many of the nominees are well known in the conservative legal movement and have shown commitment to principled and evenhanded application of the law throughout their careers,” said Carrie Severino, chief counsel of the Judicial Crisis Network, a conservative advocacy group. “For the many Americans whose top concern in November was electing a president who would put committed constitutionalists to the courts, this is another major victory.”

“This will only magnify the impact his nominees are likely to have on the federal courts,” he added.

The Senate Committee on the Judiciary will soon schedule hearings on their nominations.