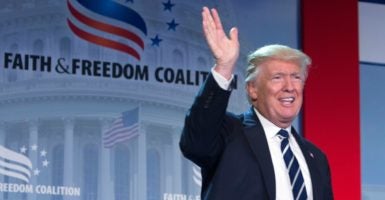 “We will not back down from doing what is right.”

Those were the words of President Donald Trump at the Road to Majority Conference Thursday.

“A nation is more than just the geography,” Trump said in his speech. “A nation is the sum of its citizens, their hopes, their dreams, their values, their prayers … Whether we are black or brown or white, we all bleed the same red blood.”

He dedicated much of his speech to emphasize religious freedom and power decentralization.

“But we know that families and churches, not government [officials], know best how to create a strong and loving community … In America we don’t worship government. We worship God.”

In his speech, Trump discussed immigration, tax reform, terrorism, repealing and replacing Obamacare, and several more specific initiatives like his push against the MS-13 gang, which includes illegal immigrants.

Trump also touched on societal issues such a cultural unity, after noting his attention to these matters during his recent meetings with foreign leaders.

Trump’s speech came after 6-year-old Christian Jacobs led the crowd in the Pledge of Allegiance in honor of his father, a fallen Marine.

“That 6-year-old stood strong and tall and proud in front of the commander in chief, just as I am sure his dad would have wanted him to be … Christian, your father was an American hero,” Trump said about the boy.

Trump finished his speech on a religious note, reminiscent of his Memorial Day speech at Arlington National Cemetery.

“As the Bible tells us, we know that the truth will prevail, that God’s glorious wisdom will shine through and that the good and decent people of this country will get the change they voted for and that they so richly deserve,” he said.

Trump spoke on the first day of the three-day event, hosted by the Faith and Freedom Coalition, a nonprofit dedicated to “pro-family” values, according to the group’s website.