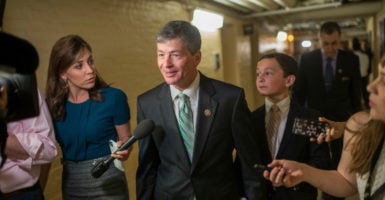 The House of Representatives will vote on legislation Thursday afternoon that one lawmaker says, if it passes, will promote economic growth and provide regulatory relief.

“The Financial CHOICE Act is designed to give working Americans that pay increase that they have earned and to unshackle the economy and let the animal spirit move yet again through our economy,” Rep. Jeb Hensarling, R-Texas, said at a briefing at The Heritage Foundation on Thursday.

The Financial CHOICE Act seeks to eliminate policies of the 2010 Dodd-Frank law, which was put in place following the 2008 financial crisis. Dodd-Frank instituted major regulations on banks and expanded the influence of the federal government in the economy.

“Included in the over 3,500-page Dodd-Frank bill are rules restricting access to credit for investors and homebuyers, raising lending costs for entrepreneurs, and making it harder for small businesses to get capital to start or grow,” Sondra Clark, digital director of Heritage Action for America, wrote in a recent op-ed.

Democrats in the House have voiced concerned about the legislation.

Every Republican ought to be asked: why are you lining up for a bill that could bring us back to days of 10% unemployment? #WrongChoiceAct

The #WrongChoiceAct would fundamentally weaken the ability of the Consumer Bureau to fight for Americans. We can’t let it pass. pic.twitter.com/Z3onbmWInv

Hensarling, who also serves as chairman of the House Financial Services Committee, said the legislation would bring deregulation.

“So we have a law that will hold Washington accountable and make sure that our regulators are there to enforce the law, not to write the law and to make sure that we have checks and balances,” Hensarling said.

The lawmaker also said the legislation will remove obscure standards that hurt businesses.

And to make sure that once again, we have the rule of law, that businesses, as one banker told me, to no longer have to hunker down in the foxholes fearful that some regulator will wake up on the wrong side of the bed and functionally shut them down for a standard that they never knew of.

The Congressional Budget Office, a nonpartisan agency of Congress, reported that the legislation would reduce the deficit by $24.1 billion over the next 10 years.

Hensarling said he looks forward to continued discussion with the upper chamber should the legislation pass the House.

“I look forward to going to conference with them soon,” Hensarling said.