EPA Delays One of the Agency’s Most Expensive Regulations Ever 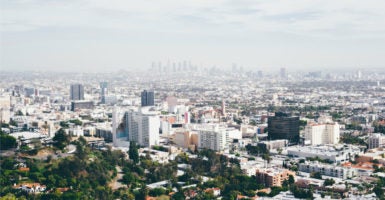 Republicans opposed the Obama administration’s lowering of ozone standards in 2015 since many counties in California and the Northeast were still out of compliance with the 2008 ozone standard. (Photo: Ashley Corbin-Teich Image Source/Newscom)

The Trump administration announced Tuesday evening it would delay the implementation of a smog rule that’s been called one of the costliest clean air regulations ever.

Environmental Protection Agency Administrator Scott Pruitt sent a letter to governors saying there’s “insufficient information” to fully implement the 2015 rule on its current timeline. The rule lowers the national ground-level ozone, or smog, standard from 75 to 70 parts per billion.

Pruitt said states would have an extra year to meet the tightened ozone standard, and the EPA would address concerns over outstanding issues, like background ozone and smog coming in from China and other East Asian countries.

“We share the goal of clean air, a robust economy and stronger, healthier communities,” Pruitt said in a statement.

“We are committed to working with states and local officials to effectively implement the ozone standard in a manner that is supportive of air quality improvement efforts without interfering with local decisions or impeding economic growth,” he said.

Environmentalists, however, said the EPA’s review is “code” for repeal. The EPA is already rolling back and reviewing other regulations, per an executive order, and activists say the ozone rule could be next.

Environmentalists said the EPA’s actions were illegal and would likely be challenged in court.

State officials welcomed Pruitt’s announcement, saying it would give them more flexibility to comply with the Obama-era regulation. States are required to submit plans to the EPA outlining how they will lower ambient ozone levels.

“I am grateful for the leadership of EPA Administrator Pruitt in courageously pausing the costly and ineffective Ozone Rule, and I’m hopeful that the one-year delay will provide time for the EPA to review the detrimental effects the Ozone Rule will have on the Texas economy,” Texas Attorney General Ken Paxton, who is challenging the rule in court, said in a statement.

Nine states, led by Republican attorneys general, challenged the EPA’s 2015 ozone rule in court, including Pruitt when he was the attorney general of Oklahoma. A federal court agreed to delay oral arguments for the ozone rule in mid-April at the EPA’s request.

The agency said it would “review” the ozone rule, which Republicans and industry groups have said could end up being one of the costliest in EPA history.

Republicans opposed the Obama administration’s lowering of ozone standards in 2015 since many counties in California and the Northeast were still out of compliance with the 2008 ozone standard.

Republican lawmakers have introduced legislation in both chambers of Congress to give states more flexibility in meeting ozone regulations set by the Clean Air Act.

Industry groups also oppose the lowered ozone standard on grounds it could cost billions, if not more, to implement. A 2014 study by the National Association of Manufacturers found a 65 parts per billion ozone standard would cost $1.13 trillion from 2017 to 2040.

The EPA only lowered the ozone standard to 70 parts per billion, but the industry still says the ozone rule could become one of the most costly EPA regulations ever imposed. The EPA says the rule will only cost about $2 billion, including California’s compliance costs.

The EPA said the benefits of the ozone rule range from $3.1 billion to $8 billion, but most of those benefits come from reducing fine particulate matter and not lower ozone levels—a completely separate pollutant.

Areas not in compliance with the rule “face consequences, including: increased regulatory burdens, restrictions on infrastructure investment, and increased costs to businesses,” according to the EPA.

“Before the ink dried on my signature and we even got the research done, the EPA had changed the ozone standard again,” she said.