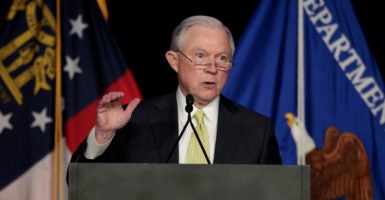 The federal government no longer will make settlement agreements with any person or organization not directly involved in a legal dispute, Attorney General Jeff Sessions announced Wednesday.

The move by Sessions abolished a practice that has funneled likely millions of dollars in banking settlements to outside organizations in such “third-party” payments.

In a formal statement, Sessions said:

Effective immediately, [Justice] Department attorneys may not enter into any agreement on behalf of the United States in settlement of federal claims or charges, including agreements settling civil litigation, accepting plea agreements, or deferring or declining prosecution in a criminal manner, that directs or provides for a payment or loan to any non-governmental person or entity that is not a party to the dispute.

For over a decade, the Justice Department has permitted corporations found guilty of wrongdoing to pay part of their financial penalty as a donation to certain pre-approved nonprofit organizations, as The Daily Signal reported last year.

After the 2008 financial crisis, the Obama administration alleged that banks were responsible for inflating the mortgage bubble.

The Justice Department and the banks settled with the settlements running into the millions of dollars, Paul J. Larkin Jr., a senior legal fellow at The Heritage Foundation, told The Daily Signal in an interview.

Sometimes the Justice Department would allow donations to third parties to be counted toward the settlement value.

The practice is unlawful, said Larkin, whose work on the issue was cited by Sessions in the attorney general’s decision.

“Some of the settlements allowed a settling party to treat $1 given to a favored organization as counting for $2 toward the settlement,” Larkin said.

Federal law requires Justice Department lawyers to deposit the funds they receive from a settlement into the U.S. Treasury so that Congress, not the president or the Justice Department, can decide how those funds should be spent.

The announcement is welcome news, Steven J. Allen, vice president and chief investigative officer at the Capitol Research Center, a conservative research institution based in Washington, told The Daily Signal in a phone interview Wednesday.

“It’s about time that someone did something about this,” Allen said. “It is a practice that had been going on throughout the government for decades, and we need to crack down. This is a very important first step by the attorney general.”

“Today’s decision by the attorney general to end the Justice Department’s use of settlement agreements to fund politically favored organizations is a win for the victims in such disputes and for checks and balances in government,” Grassley said. “Under the Constitution, Congress holds the purse strings.”

“Sessions’ decision is the right one because it ends an unlawful and unethical Justice Department practice,” he said. “The department’s third-party payment practice was tantamount to the theft of money that belonged to the public.”