Yes, America Is in the Midst of a Civil War 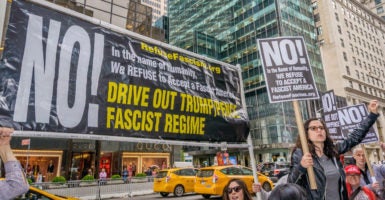 Writers never know when something they write will strike a nerve—or, in the common phrase of the internet, “go viral.”

Yet my last column, “Why Conservatives Still Attack Trump,” did both. Aside from being reprinted on almost every conservative website, Newsweek published the column, and The New York Times quoted it.

More importantly, many major conservative writers responded to it, mostly in disagreement.

It is interesting that the column elicited so much attention. Maybe, like the man who bit the dog, an articulate case by a mainstream conservative in support of the president is so rare that people felt a need to publish it and respond to it.

Whatever the reason, I feel compelled to respond to some of the disagreements.

Before doing so, I want to note the respectful tone that permeated virtually every one of the disagreeing columns. We have enough cannibals on the left without conservatives eating each other up.

Indeed, Jonah Goldberg in National Review said as much. He denied that we are in the midst of a civil war on two grounds: One is that it is not violent, and the other is that we are fighting a “culture war,” not a civil war.

Whenever I write about the subject, I almost always note that this Second Civil War is not violent. I never thought that the word “war” must always include violence.

Nevertheless, what most disturbs me is his second argument—articulated in various ways by most of those who disagreed with me—that there is simply no civil war. And many repeated the universal belief among Never-Trumpers that a Hillary Clinton victory would not have been a catastrophe.

My response is that “culture war” is much too tepid a term for what is going on now. Maybe anti-Trump conservatives are fighting a “culture war,” but the left is not.

The left is working to undo the American Revolution. It’s very close to doing so.

Of all people, one would think Goldberg would understand this. He is the author of what I consider to be a modern classic, “Liberal Fascism: The Secret History of the American Left, from Mussolini to the Politics of Change.”

His book leads to one conclusion: We are fighting fascism. How is that not a civil war? When you fight fascism, you are not merely fighting a “culture war.”

So, shouldn’t the primary role of a conservative be to vanquish leftism? To me, that means strongly supporting the Republican president of the United States, who has staffed his Cabinet with conservatives and already won substantial conservative victories.

As I suggested in my previous column, conservatives would have been thrilled if any Republican president had achieved what Trump has at this point in his administration.

“But what about Trump’s character?” nearly all my critics ask. Or, as John Podhoretz, editor of Commentary Magazine, tweeted, “For Dennis Prager, who spent 40 years advocating for a moral frame for American politics, to argue as he argued today is, may I say, ironic.”

For Dennis Prager, who spent 40 years advocating for a moral frame for American politics, to argue as he argued today is, may i say, ironic

First, I have indeed dedicated much of my life to advocating for morality—for ethical monotheism as the only way to achieve a moral world; for raising moral children (as opposed to concentrating, for example, on raising “brilliant” children); and for the uniquely great Judeo-Christian moral synthesis developed by the Founding Fathers of America.

But I have never advocated electing moral politicians.

Of course, I prefer people of good character in political office. But 30 years ago, I wrote an essay titled “Adultery and Politicians” in which I argued that what political leaders do is more important than their character.

To cite but one of an endless list of examples, I would prefer an adulterous president (like John F. Kennedy) who supported Israel than a faithful family man (like Jimmy Carter) who was an anti-Zionist.

Second, as a religious Jew, I learned from the Bible that God himself chose morally compromised individuals—like King David, who had a man killed in order to cover up the adultery he committed with the man’s wife, and the prostitute Rahab, who was instrumental in helping the Jews conquer Canaan—to accomplish some greater good.

(And, for the record, I am not suggesting that God chose Donald Trump.)

Third, though I listed his moral defects in column after column during the primaries, I believe that Trump is a better man than his critics maintain. I see no evidence, to cite one example, that he is a misogynist.

b) not a statement about anything he had actually done;

c) not misogynistic, and

Fourth, even if he were as morally defective as his critics maintain, my response is this: Trump’s character is less morally significant than defeating the left.