Drones Are About to Revolutionize Our World. This Bill Will Let America Lead the Drone Economy. 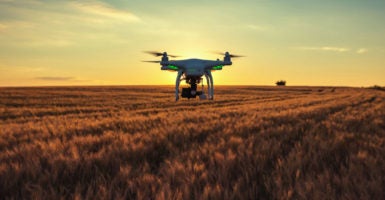 The last decade has seen a boom in recreational drone usage, as hundreds of thousands of law-abiding hobby pilots have taken to the skies with enthusiasm.

And the innovation is just beginning.

Drones may one day be used for infrastructure inspection, to transport life-saving devices to people across the country, or even to help local police track down fugitives.

These services will undoubtedly deliver countless benefits to society, but increased drone usage will also bring with it new and complex challenges.

How should drones be integrated into the national airspace system while preserving the integrity and safety of manned aviation? How should conflicts between drone operators and landowners be addressed?

Should responsibility for setting the rules of the road in the low-altitude airspace rest chiefly with the Federal Aviation Administration, or with state and local governments?

This issue calls for sweeping legislation to lay the groundwork for the changes that are coming. That legislation has now arrived.

The bill takes a novel approach, recognizing and balancing the interests of federal officials in maintaining airspace safety with the responsibility of local and state governments in policing conduct within and among their communities, and with private property owners who may not be keen on drones routinely buzzing their backyards.

To this end, the Drone Federalism Act affirms the federal interest in FAA regulation of the national airspace and interstate commerce, manned aviation, and all drone activity in the airspace above federal property.

Outside of these restrictions, the bill vests in state, local, and tribal governments the power to “issue reasonable restrictions on the time, manner, and place of operation” of drones when flown “below 200 feet above ground level or within 200 feet of a structure.”

These could include speed limits, the establishment of acceptable hours of operation, and demarcating drone-free zones around “schools, parks, roadways, bridges, or other public or private property.”

Common law once granted an absolute right to the airspace above private property, but this archaic understanding was rendered obsolete by the rise of manned aviation. Homeowners no longer own everything “up to the heavens,” as the ancient “ad coelum” doctrine provided.

In United States v. Causby (1946), though, the Supreme Court held that homeowners do own “at least as much of the space above the ground as they can occupy or use.”

The “exclusive control of the immediate reaches” of the atmosphere above private land was recognized as essential, or “buildings could not be erected, trees could not be planted, and even fences could not be run.”

In language borrowed directly from Causby, the Drone Federalism Act affirms a property interest in the “immediate reaches of the airspace above property.”

If passed, property ownership would include 200 feet of airspace above private land and any structure on it, and the FAA would be prohibited from promulgating any rule authorizing “operation of a civil unmanned aircraft” within that space without the owner’s permission.

These provisions would ensure that the FAA cannot simply designate a low-altitude corridor for drone commerce without first addressing the concerns of the landowners directly affected by such activity.

As Cotton put it, “This bill will return power to regulate everyday drone use to the proper level, states and local communities.” This makes sense for a host of reasons. Most issues that are likely to arise in low-altitude drone operations—trespass and nuisance complaints, flights over public land, and night flying, for example—are inherently local matters, and responses to them should reflect local preferences.

Town councils and local zoning boards will be better positioned than federal regulators to develop responsive and robust policies that suit the needs and preferences of their citizens.

But federal officials do have unparalleled expertise in the aviation field that they can bring to the table to assist city, state, and tribal governments in developing their regulatory approaches to drones.

To that end, the Drone Federalism Act mandates that the FAA establish pilot programs with 10 local, state, and tribal governments of varying size and “intended approach to regulation” in order to provide “technical assistance” and to “coordinate efforts with respect to the enforcement of regulations relating to the operation” of drones in those jurisdictions.

The Drone Federalism Act also guarantees state, local, and tribal governments a seat at the table in the ongoing NASA-led effort to develop an unmanned aircraft traffic management system, a drone analog to the air traffic control system used for manned aviation.

In contrast to the federalism-based approach envisioned in the Drone Federalism Act, the FAA has for the last decade asserted that drones fall almost exclusively within the confines of its authority.

Consequently, in the FAA’s view, local communities would have virtually no control over how drones interact with, and affect, their own local affairs.

Imagine a small township having to petition the federal Department of Transportation every time it wanted to change a speed limit, install a speed bump, or designate a “no parking” zone.

The result would be a needless slowing of basic decision-making that is inherently local. In the low-altitude airspace, total federal preemption would produce the same result for drones.

Nevertheless, some advocate that federalism has no place in the regulation of drones because it may produce a “patchwork” of state and local laws that vary by jurisdiction. More efficient development and deployment of drone technology, they argue, would be facilitated by providing a single set of national rules.

In reality, the reverse has been true. The FAA’s control over this field has, in fact, proven to be a hindrance to these services.

Drone companies have moved their development operations overseas, where governments have been more inviting and more robust in establishing flexible rules that allow them to operate. Chinese drone manufacturers dominate global markets.

The Drone Federalism Act proposes to chart a new course, one that guarantees the safety of the national airspace system without compromising the traditional right of states and localities to police the conduct that takes place within their own communities.

States will be free to compete with one another to create inviting conditions that attract drone businesses, much as states do today when they offer competitive tax rates and regulatory environments meant to lure job-creating industries.

But the Drone Federalism Act will not throw open the doors to the Wild West. This process will be guided by the FAA, which will provide big-picture guidance and retain firm control of the navigable airspace.

The FAA has full authority to provide for the safety of manned aviation, including promulgating rules governing drone activity below 200 feet where conflicts may emerge between drones and manned aircraft.

This authority, stemming from section 40103 of Title 49, would allow federal regulators to secure airspace around airports, as well as military training routes and other federal facilities.

Citizens will benefit, not only as revolutionary drone technologies come to market more quickly, but from the federal guarantee of airspace property rights above their homes.

Technological development and economic advancement do not require us to forfeit basic rights, or principles like federalism that help to maintain them.

The federalism-based approach envisioned in the Drone Federalism Act is precisely the approach America needs, and it has won the support of the National Governors Association, the National Conference of State Legislatures, and the National Association of State Aviation Officials.

Congress would be wise to consider such reforms.