John Kerry Would Return as Climate Czar in Biden Administration

Making Net Neutrality a Thing of the Past 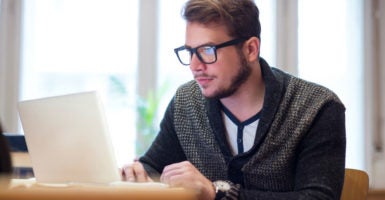 As the FCC rolls back net neutrality regulations, senators are making legislative efforts to further free up the internet across the U.S. (Photo: iStock Photos)

Anyone who has followed the hyperbolic debate about net neutrality has likely heard that the Federal Communications Commission is moving to “squelch competition,” “limit consumer choice,” “raise prices,” and perhaps even “destroy the internet.”

At least, that is what some activists and crusading late-night comedians claim.

But none of this is true.

Rather, what the FCC did two weeks ago was vote to reconsider the agency’s barely 2-year-old decision to begin regulating the internet, for the first time ever, under Title II of the 1934 Communications Act.

Why did the FCC begin to regulate the internet through a law designed to govern rotary telephones?

It wasn’t because the existing free and open internet was harming Americans. The activists and entertainers clamoring for more government claimed it was under attack by predatory internet service providers.

But strangely enough, none of them could actually provide any evidence for that serious assertion. Instead, they speak about imaginary or hypothetical harms. The 400-page rule uses words like “may,” “could,” “might,” or “potentially” several hundred times.

Nor did the FCC issue its 2015 regulation because Congress told it to.

On the contrary, after passing the bipartisan Telecommunications Act of 1996, a group of bipartisan senators affirmed the internet’s status as a free and open information service, stating that “nothing in the 1996 Act or its legislative history suggests that Congress intended to alter the current classification of internet and other information services or to expand traditional telephone regulation to new and advanced services.”

What the internet does need is regulatory certainty, which is why I recently introduced the Restoring Internet Freedom Act with several of my colleagues.

This bill would fully repeal the FCC’s 2015 internet takeover. More importantly, it would prevent the FCC from interfering with the internet in the future unless specifically authorized by Congress.

But we shouldn’t stop there. Instead of waiting for regulators and activists to find new excuses to restrict the internet, we should open it further to extend more choices to American consumers.

Thankfully, my colleagues in the Senate have already identified many of the regulatory barriers preventing more providers from entering the market.

Sen. Dean Heller, R-Nev., is a champion for reducing barriers to deploying broadband throughout the West. Sens. John Thune, R-S.D., and Bill Nelson, D-Fla., the chairman and ranking member of the Senate Commerce Committee, have introduced measures to free up the radio spectrum held by federal agencies and organizations.

These are just a few of the many thoughtful ideas to reduce barriers to entry.

For the sake of American consumers and innovators—not for entrenched business interests—I hope to work with partners in the House, Senate, and FCC to promote competition in the technology sector, including among internet service providers.

If that means underperforming companies have to work a little harder for their customers, all the better. Because the end result of lively competition is more investment and innovation by businesses, which translates into more choices and better service for consumers.