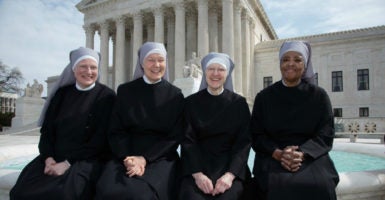 For employers that don’t want to provide birth control and abortifacient coverage in health insurance plans, relief may be on the way.

The proposed move is being cheered by some conservatives.

“Better late than never,” Mark Rienzi, senior counsel with the Becket Fund for Religious Liberty, a nonprofit legal organization, said in a statement.

“At long last the United States government acknowledges that people can get contraceptives without forcing nuns to provide them,” Rienzi added. “That is sensible, fair, and in keeping with the Supreme Court’s order and the president’s promise to the Little Sisters and other religious groups serving the poor.”

The Becket Fund represents the Little Sisters of the Poor, an order of Catholic nuns who fought the Obamacare contraception and abortifacient mandate all the way to the Supreme Court.

Last year, the Supreme Court “‘vacated,’ meaning erased, all of the lower court cases and required them to reconsider the claims brought by the Little Sisters of the Poor and others that the regulations promulgated pursuant to Obamacare violate their religious exercise in light of the government’s admission that it could indeed provide contraceptive coverage without the Little Sisters’ collaboration,” wrote The Heritage Foundation’s Elizabeth Slattery and Roger Severino, a former Heritage employee, at the time.

“While this apparent leaked document is a draft, it is a very positive sign to see the federal government work to cease its hostility toward Christians and those who object to the Obama-era health care mandates,” Perkins said in a statement. “This draft regulation shows that [Health and Human Services] Secretary Tom Price and President Trump intend to make good on their pledge to vigorously protect and promote [America’s] First Freedom.”

Birth control advocates, such as Keep Birth Control Copay Free, an organization that promotes birth control access, are not supportive of the potential rule change.

Get ready for all the new excuses to deny birth control (unless we fight together.) A great piece by @StassaEdwards: https://t.co/0jGdLzT2S6

“President Trump has been clear that religious liberty is important and that religious orders, such as the Little Sisters of the Poor, are deserving of that freedom as well,” a White House spokesperson told The Daily Signal in an email.

The leaked rule “would leave in place the religious ‘accommodation’ created by the Obama administration, making that route available to groups that choose to continue using it,” according to the Becket Fund.

The Becket Fund also noted in its press release that many Americans remain on health insurance plans that do not have to provide abortifacients or birth control:

One hundred million Americans—nearly one in three—don’t have insurance plans that must comply with this mandate. The government was already exempting large corporations like Exxon and Visa, and even its own government-run plans for the disabled and military families.

Eric Rassbach, deputy general counsel at Becket, told The Daily Signal in an email that the proposed rule could be published in the next week or in the next several weeks.