Successful US Missile Defense Test Shows How Essential This Program Is 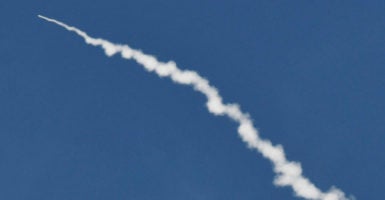 The U.S. Missile Defense Agency launched a successful test of a ground-based midcourse defense missile on Tuesday, intercepting a mock missile launched from over 4,000 miles away. (Photo: Gene Blevins/Polaris/Newscom)

On Tuesday, the agency successfully intercepted an intercontinental ballistic missile in an important test utilizing its ground-based midcourse defense system.

The ICBM—mocked up to resemble a missile capable of carrying a nuclear payload similar to the ones that North Korea is feverishly pursuing—was launched over the Pacific Ocean some 4,000 miles away from the intercepting missile’s launch site at Vandenberg Air Force Base in California.

The test was an important step in reaffirming our nation’s missile defense program’s ability to protect the American homeland from long-range ballistic missile threats.

This is particularly relevant given the increased bellicosity with which North Korean dictator Kim Jong Un has been attempting to flex his nation’s military might. Since the beginning of the year, North Korea has launched a total of 12 missiles in nine separate tests.

The missiles launched by North Korea have ranged from short- to medium- to intermediate-range ballistic missiles.

The increase in provocative missile tests by the rogue North Korean regime should be seen as both a warning and an opportunity.

It is a warning that, despite past rhetoric to the contrary, North Korea is firmly determined to achieve the capability to strike the American homeland with offensive, nuclear-armed ballistic missiles.

It is also an opportunity because as recognition of North Korea’s intentions and capabilities becomes clear to even the blindest skeptic, Congress and the Trump administration can feel confident in their investment in a robust, comprehensive missile defense program.

A multilayered, robust missile defense system has been, and will remain, an integral element of America’s broader national security apparatus.

Missile Defense Agency Director Vice Admiral Jim Syring hailed the defense system as “vitally important” and said that Tuesday’s test “demonstrates that we have a capable, credible deterrent against a very real threat.”

Syring added, “The intercept of a complex, threat-representative ICBM target is an incredible accomplishment for the [ground-based midcourse defense] system and a critical milestone for this program.”

Tuesday’s missile defense test against an ICBM-class threat was indeed an important milestone, but it’s also a reminder that missile defense is not a one-time investment.

Missile defense requires a sustained commitment to building upon the successes of today while also investing in the technology of the future.

Investment in and commitment to missile defense technologies wavered under the Obama administration.

As Michaela Dodge of The Heritage Foundation wrote last year, “President Obama’s missile defense policy shifts cost the nation precious time and capabilities at a time when adversaries are succeeding in advancing their own ballistic missile programs.”

Unfortunately, the United States can no longer afford to waste precious time in developing and enhancing the capabilities necessary to defend the American homeland. The threats from rogue nations such as North Korea and Iran, as well as from regional adversaries throughout the world, is only increasing.

Tuesday’s successful test against an ICBM-class missile was an important moment in the history of America’s missile defense program development. Yet it must be understood as only the next step in an evolving and essential program.